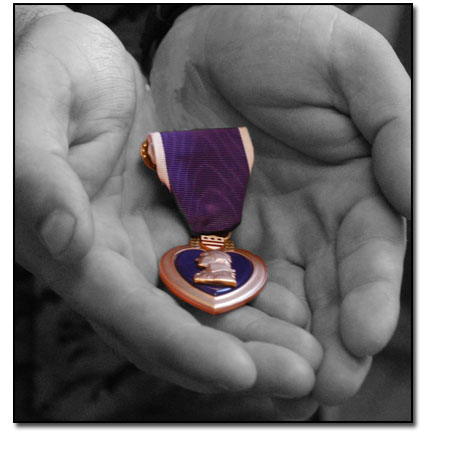 Wounded Marines and sailors and their families will soon be visiting Hatteras Island as part of the Cape Hatteras Wounded Warriors Vacation Project.

The two Hatteras men who started the project are now involved in raising funds and procuring donations of rental cottages, meals, gas, fishing trips, and the like that will help the service families rest and relax on the island.

They are working directly with the Military Order of the Purple Heart at Camp Lejeune, N.C., and the Wounded Warriors-Battalion East, based at Camp LeJeune, both of which cater to injured Marine and Navy personnel throughout the country.

The founders of the project are Kevin McCabe of Buxton and John McGee of Frisco, both sons of Marines.

McCabe, the son of the late Thomas John McCabe, is an avid surfer and fisherman who surfed Onslow Beach near Camp LeJeune when he was growing up in a U.S. Marine family.

McGee, who owns a landscape business, is the son of retired Marine Sgt. Maj. Richard “Mac” McGee, a Purple Heart recipient who served three tours of duty in Vietnam and was wounded twice.

“We are very proud and honored to help bring the Cape Hatteras community together with our country’s wounded combat warriors,” the two men wrote in a fundraising letter.

“Our mission is to provide combat-wounded Purple Heart recipients and their families sincere hospitality and quality vacation time on Hatteras Island. We will also offer a variety of recreational activities if they choose.”

In interviews, both McCabe and McGee said they had been talking and thinking about doing something for wounded combat veterans for some time.

McCabe remembers that he was in an island tackle shop when the subject of wounded servicemen came up in conversation.

“I told them that if anyone comes and they want to go fishing, give me a call,” McCabe says.

“Hatteras Island has always supported our military,” they wrote in their letter, “and it is our hope that this project will be a reflection of our wonderful community and hopefully promote a bridge between Hatteras Island and the neighboring bases.”

McGee notes that there is a lot going on in the Camp Lejeune area to help wounded combat veterans and their families.

According to its website, the Marine Corps Wounded Warrior Regiment provides and facilitates non-medical care to combat and non-combat wounded, ill, and injured marines and sailors attached to or in direct support of Marine units and their family members in order to assist them as they return to duty or transition to civilian life. The WWR assists active, reserve and veteran Marines.

The Regimental Headquarters is in Quantico, Va., and commands the operations of two Wounded Warrior Battalions located at Camp Pendleton, Calif., and Camp Lejeune, and multiple detachments in locations around the globe.

McGee notes that the Wounded Warrior program at Camp Lejeune has a new barracks for combat veterans and a new facility, Fisher House, where their families can stay while their loved ones are being treated.

The Cape Hatteras project, the two said, will work with the Order of the Purple Heart chapter near Camp LeJeune on the financial aspects of cash and in-kind donations.

They say that there are limited funds available for this project and that donations will be needed and certainly appreciated. They need cottage accommodations, gift certificates of any kind, recreational services, volunteers, and monetary donations of any size. The donations are tax-deductible.

McGee adds that once the project gets a fund started, they hope to complement “big ticket” items, such as a house rental or a charter boat trip.  On the boat trip, he says, the captain and mate may donate time and the project could pay for fuel.

The two men say the project “will start out small but could grow very quickly to become a great opportunity for all.”

Offers of donations, house rentals, and gift certificates are already coming in.

“A lot of people want to make the connection with servicemen,” McCabe said.

You can make donations by check or money order only to Military Order of the Purple Heart. Please write on the memo line: for WW-Hatteras Vacation Fund. Send checks to: WW-Hatteras, P.O. Box 431, Frisco, N.C. 27936. Make gift certificates to Purple Heart Recipient.