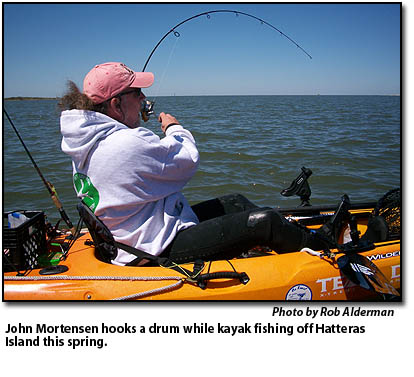 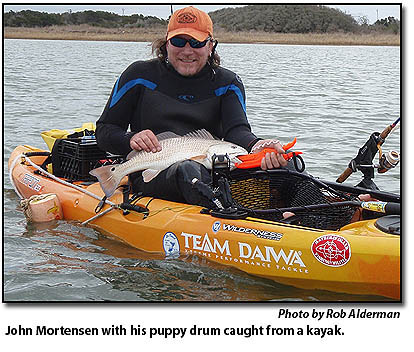 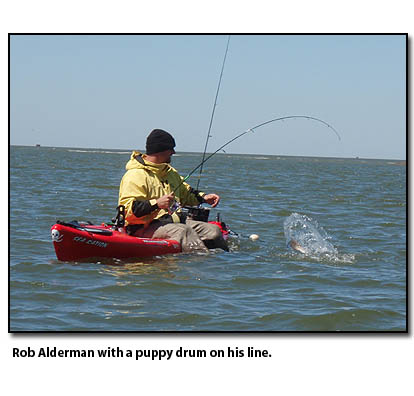 After seeing the headline on this story, most of you have probably started reading out of sheer curiosity.

With a name like “kayak wars,” that could be expected. I was enticed into looking into this most eyebrow-raising pairing of words after a winter fishing trip.

During a recent kayak fishing trip to the Florida Keys, my group had a gang of young bucks from Louisiana staying beside us, who were also spending a little time in the Keys looking to catch fish from kayaks.

During one of our conversations, these boys from Louisiana State University started to tell me about how they were looking to rack up points for “kayak wars.”

“Do what?” I thought to myself. I had no idea what they were talking about, but it sounded cool to me and I had to further investigate.

So, we fished for two weeks in the Keys with only some small fish to talk about, since the weather in Florida wasn’t a far cry from being in Maine, but this kayak wars thing never left my brain.

Sure enough, when I got home, one of the first things I did was google this term, and there was a link to a Web site. I was completely consumed by the Web site and the idea of what they were pushing for an hour or so.

The creators, Oz and Ric, have developed a site that caters to the newbie and hard-core kayak fisherman alike and asked them to show their stuff in a fun and exciting way.

It’s quite simple. Kayak fishermen form and register a three- to five- person team, based on divisions, which are broken down by the region in which you live. There are numerous inshore and offshore saltwater fish that have all been allotted different points. The team members go out for the entire year and see which team can rack up the most points in the hopes of best representing their region.

The simple rule of honesty plays heavily into this challenge, as the only way to register points is to take photos and uplo ad them to the stie. There are some rules to what can be uploaded and how, to best protect against cheating. Team members are allowed to register a limited number of fish per species, per month.

The prizes are made up mostly of kayak gear, apparel, and other accessories, which have been donated by sponsors, though they do have a  brand new kayak to give away. There are several other small categories that can win you prizes and/or points.

Participating in this war is free to the public, so this is kind of a no-brainer. If you are going to be kayak fishing and taking photos anyways, why not try to form a team and enter the competition?

Anyone who follows my exploits (all three of you) will already know that I live for outside-the-box thinking, and that is exactly what this is. Right now, this online challenge caters to the entire Gulf Coast and Eastern Seaboard, which is one heck of a coverage area. So, this simple and innovative idea brings together a vast community across a great area and encourages them to participate and keep an eye on their fellow competitors and their exploits.

Online social networking games and communications have taken over our world and games like Facebook’s “Farmville” will probably be listed in the dictionary in the near future, but that is not for me. I want to be outside having fun and still be a little bit competitive, so this is a dream idea for people like me — fun fishing, fun participation, and good ol’ fashioned fun-smack talking.

Th e progression to kayak fishing the past few years for me was only natural. One can catch a 40-pound red drum from the pier, surf, boat, or kayak and every venue will have its own challenges and fighting experience. There is no comparison amongst the different ways to catch fish when it comes to the fight.

For a person like myself who suffers from hyperactivity, ADD, and every other acronym under the sun, so many forms of fishing keep me from growing bored with it. I am no expert in any one form, and I have no allegiance to any one form of fishing, but I catch fish and I think it’s all great.

So, kayak wars, I welcome you and appreciate the hard work of your creators. There is so much  politics in fishing these days—from beach closures, fish closures, and Marine Protected Areas to name a few. This is a great way to forget about it all from time to time and just go back to fishing.

I was able to form two teams from my Web site, www.FishMilitia.com to represent the Northeast, and we hope to do our best in showing the rest of the country the fishing we have here on the Outer Banks. But, in the end, it’s all about getting outside and having fun.

Thus far in the past week, teammate John “JAM” Mortensen and I have managed to get on the scoreboard by catching puppy drum from the Pamlico Sound. There seems to be no lack of the pups right now, and we hope to continue to put “da heat” to everyone in our region.

And, for all you non-kayakers, the big drums have shown up at the south end of Ocracoke and a few have been taken at Hatteras Inlet. I expect the drum to jump off at Cape Point at any moment. The puppy drum have been thick ,along with a nice class of 2- to 4-pound bluefish on Ocracoke, which both are being caught on gold Hopkin’s lures and cut bait.

The weather is warming up, the island businesses are starting to reopen and the new season is just beginning. So, stand up, get outside and bring your butts to the Banks—the welcome signs are on.

You can find out more about Kayak Wars and Gulf Coast surf fishing at www.ExtremeCoast.com