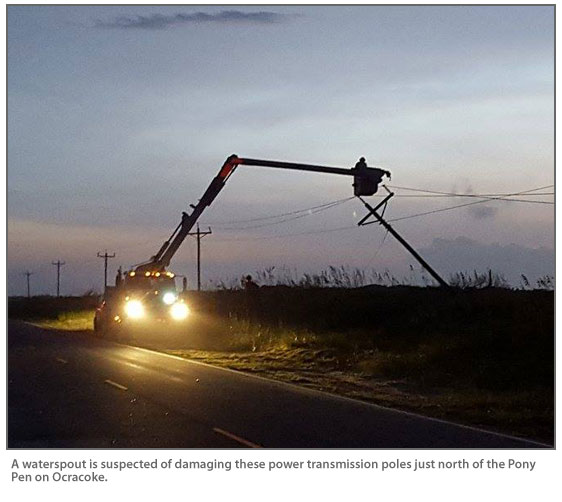 The U.S. District Court for the Eastern District of North Carolina overseeing the class action filed against PCL granted preliminary approval on May 2 to a $10.35 million settlement to compensate businesses, vacationers, and residents of the Ocracoke and Hatteras Islands.

From there, the settlement boils down into three distinct classes:

At the Tuesday meeting, attorney Dennis Rose from the Kill Devil Hills law firm of Rose Harrison & Gilreath fielded questions while providing additional information on what effected parties need to do next.

For Information and New Claim Submissions

Essentially, the next step in the process begins with the website, http://www.obxsettlement.com/.

The website is still being finalized, however, it will eventually contain an online claim form as well as a toll-free number for parties with questions on new claims, as well as outstanding claims which were filed before the settlement. The claims will continue to be managed by Crawford & Company, which was appointed by PCL and its insurers to handle claims since shortly after the power outage.

It is not known when the online claim forms and contact information for questions will be available on http://www.obxsettlement.com/, but it will likely be within the coming days.

“We’re doing everything we can do to get Crawford & Company to set up that information,” said Rose at the meeting.

Per the lawsuit settlement, business owners submitting a new claim have two options.

For New Claims for Residents, Vacationers, and Vacation Property Owners

Once the online claim forms are available at http://www.obxsettlement.com/, all classes of claimants can complete and electronically submit a claim form, or may download the form and submit it via mail to Crawford & Company. Per the lawsuit, once submitted, Crawford & Company must respond within 30 days to let the claimant know if their forms are sufficient.

All claim forms must be submitted and / or postmarked by October 15, 2018.

For Existing and Outstanding Claims

“They stopped the process until the court approved it,” said Rose. “I want to say that there were about 123 claims sitting there, with nothing happening.”

Per the settlement, all claims must be responded to within 30 days, so people with existing claims with PCL that are still outstanding are directed to contact the toll-free number that will soon be available on http://www.obxsettlement.com/ for an update.

Rose also noted that there was no need for anyone with an existing claim to re-submit any additional information. “If you already submitted a claim form, it’s there and they have it, and there should be no reason why you would need to submit another one,” he said.

Anyone who has already received a settlement from PCL may not submit a new claim.

The Breakdown of the Settlement

The Settlement establishes a claims program whereby the Settlement classes will receive cash payments. Defendant PCL will pay into the Settlement Fund $10,350,000, (less any attorneys’ fees, costs, and incentive awards), of which $100,000 will be used to pay for the costs of notice and administration.

When Will Claims Arrive

Though there is not a definitive timeframe on when claims will arrive, it should be noted that Crawford & Company has to respond on whether claim forms were sufficient within 30 days of submission, and that the “preliminary approval” designation of the settlement – as opposed to final settlement approval – should not slow down the claims process. The final settlement approval is slated to occur in the early fall.

“Nothing works too fast in the court system,” said Rose at the meeting, “but hopefully we can start paying claims soon.”