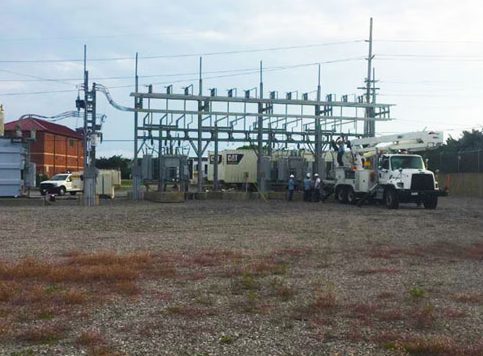 On July 27, 2017, residents and visitors all across Hatteras and Ocracoke islands woke up in the dark.

With clear weather conditions and no storms in sight, most folks initially believed that the surprise power outage must be due to maintenance, or some small issue with the power lines – like a stray kiteboarding kite. (It had happened before.)

It wasn’t until mid-morning that it started to become clear that there was a much bigger problem at hand.

At 4:30 a.m. on that Thursday, PCL Construction, the company constructing the new Bonner Bridge, mistakenly drove a steel casing into three underground transmission cables that ran between the south end of the Bonner Bridge and the overhead riser pole, causing a transmission outage for all of Hatteras and Ocracoke islands.

By that afternoon, islanders were told to brace for “an extended power outage.”

Cape Hatteras Electric Cooperative (CHEC) on Hatteras Island and Tideland EMC on Ocracoke Island immediately went to work acquiring generators to power as many homes and businesses as possible. Buxton and Frisco were the first villages to be switched over to the generators, and more units rolled in from all across the East Coast to handle the crisis. Meanwhile, residents and visitors in other villages waited and tried to stay cool.

Once generators arrived for all of Hatteras Island, the new challenge was to provide power without overloading. Being late July, it was the height of tourist season, and most people on the island got into a frustrating routine of celebration when the power clicked on for 10 minutes, followed by disappointment when it clicked off simply because there was too much load to carry.

At 5 p.m. on Thursday, July 27, the Hyde County Board of Commissioners issued a mandatory evacuation for all non-residents, leading to the evacuation of 10,000 Ocracoke Island visitors. On Saturday, July 29, Dare County followed suit, and thousands of visitors were evacuated from Hatteras Island in an effort to get generator power up and running for the few people who remained.

Remaining residents were ordered to keep air conditioners off, and to conserve power until the outage was over, and the combination of the evacuation and conservation efforts kept the generators going without interruption in the days to come.

At that point, a number of residents in the tri-villages and Avon areas had gone 36 hours without power, losing all their refrigerated or freezer contents, so the onset of generator power was a big relief.

But there was a much larger issue to focus on. It was late July – one of the prime times for businesses to make their seasonal income – and there were no visitors.

The deserted island during the outage was an eerie sight for the folks left behind. The parking lots at local landmarks like the Cape Hatteras Lighthouse or Canadian Hole were empty. Most businesses closed, but a handful remained open with fans running to try to recoup a little of their losses from the local population. Governor Roy Cooper spoke to a packed house at the Avon Pier about the outage, and what was being done – which included a State of Emergency order. It felt like a hurricane evacuation, sans the hurricane, and one resident remarked “This is the warmest February I can remember!”

While islanders were out of sorts, having been forced into temporary and unexpected unemployment, CHEC was exhaustedly working 24/7 to address the problem by pursuing two simultaneous solutions.

Because the three cut cables were located well underground, an excavation team from PCL Construction worked to build a trench at the site of the damage, pumping saltwater out of the hole as they dug deeper and deeper. At the same time, crews worked quickly to set overhead poles in order to create an overhead transmission line that would run from the south end of the Bonner Bridge to the already-existent overhead lines. Both operations continued for days, and it was understood that whichever solution worked first was the preferred option.

The overhead line solution was completed first, and on Thursday, August 3, the power was reconnected, and visitors were allowed back on the island on Friday starting at noon.

The story wasn’t over, though, as an estimated 5,000 residents on Hatteras Island and 900 residents on Ocracoke who had been left behind now needed to compensate for losing business during one of the busiest weeks of the year.

PCL began a website to handle claims from residents, homeowners, business owners, and vacationers, while lawsuits were rapidly filed in the weeks to come. Eventually consolidated into a class action lawsuit with six law offices representing the claimants, this primary lawsuit was finally settled in May, 2018, in the amount of $10.35 million.

Claims are still be processed to this day through the current claims website, http://www.obxsettlement.com/, and residents, visitors and business owners still have until October 31, 2018, to file a new claim. Per a representative from the Zaytoun Law Firm, one of the firms associated with the suit, claims are continually being finalized and paid out, but additional claims are trickling in as the final deadline to file inches closer.

It has officially been a year since the islands went dark for a week, but the memory of waking up on a normal Thursday to a days-long power outage still lingers for folks who were visiting or living on Hatteras or Ocracoke Islands. But with overhead power lines now in place, and the Bonner Bridge construction project wrapping up its work in anticipation for a late 2018 opening, the Power Outage of 2017 is a rare event that likely won’t happen again anytime soon.