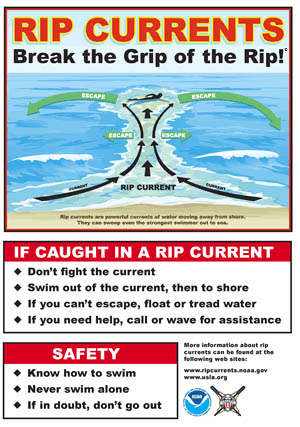 The body of a 19-year-old man from Gloucester, Va., was recovered about 3 p.m. on Thursday, Aug. 19, on the Cape Hatteras National Seashore beach near Ramp 4 on Bodie Island, a day after he disappeared while swimming off the same beach on Wednesday morning.

The friends reported that Mouring suddenly disappeared during the swim.

The ocean was rough at the time, as it had been for about a week, and the National Weather Service had warned of a moderate risk of rip currents in the area.

The search was suspended at about dark on Wednesday night.

This is the second drowning on the seashore this season.

Last year, according to the National Park Service, five people drowned on seashore beaches. Only one person drowned on the beaches in 2008, which park officials said was an anomaly.  There were eight drowning deaths in 2007 and seven in 2006.

Rip currents are a major cause of drowning on the seashore.

Rip currents are strong river-like currents that move away from the shore.  If caught in a rip current, stay calm, wave for assistance, and swim parallel to shore. Don’t swim against the current.  Once out of the current, swim directly to shore.

For more information on rip currents

Local rip current forecast:
www.weather.gov/newport.  Click on marine forecasts on the left side of the screen. Look for rip current information forecast.

A visitor from Maryland was caught in a rip current and drowned on Saturday, Aug. 7, on Ocracoke.

Fuller said that the Park Service and Ocracoke Emergency Medical Services were called to the beach 1/2 mile south of Ramp 72 at about 4:20 p.m. on Saturday.

Fuller said that four people were caught in a rip current, and that three rangers and one Park Service lifeguard responded to the scene.

When they arrived, only one person was still in the water and was being pulled in by several bystanders.  Ocracoke EMS personnel and the lifeguard immediately began CPR, but the victim could not be revived.

Also caught in the rip current with Wolf were his wife, Emily, and his children, Eric, 17, and Erin, 14.  Emily Wolf was transported to Outer Banks Hospital by Ocracoke EMS.

The drowning was the first on the seashore this summer.

The National Weather Service in Newport, N.C., elevated the rip current threat on Hatteras and Ocracoke to high at 4:35 p.m. on Saturday afternoon.

The advisory said that the combination of high astronomical tides and a long-period swell from Tropical Storm Colin, which was well east of the Outer Banks, would keep the risk of rip currents high on Hatteras and Ocracoke through Sunday evening.

The most likely time for life-threatening rip currents, the Weather Service said, is a couple hours either side of low tide, which will be about noon on Sunday.

Rip currents are powerful channels of water flowing quickly away from shore.  They occur most often at low spots or breaks in the sandbar and in the vicinity of structures, such as groins, jetties, and piers.