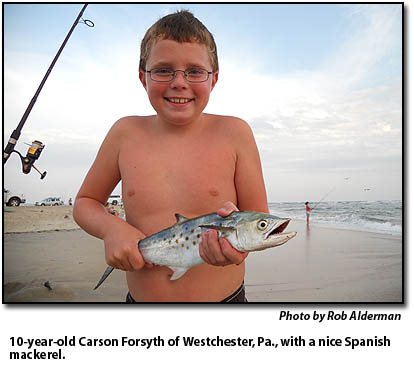 Welcome once again to the IFP’s weekly fishing report, brought to you by the Hatteras Island Fishing Militia.

Another summer week has passed, and more of our country’s children have returned to school. As the summer winds down, Hatteras and Ocracoke island fishing fans await the fall season.

The beach and pier fishing seem to be slow overall, but the offshore reports remain solid.

The fleets out of Oregon Inlet continue to boast good catches of white marlin and sailfish, while the mahi-mahi fishing has slowed considerably.

Mahi fishing is one of those deals where a boat or two may get on a good weed line that produces their limit, while most of the other boats just pick a few of them.

The citation red drum continue to be hammered by the inshore boats when the conditions allow. Scattered blues, Spanish mackerel, triggerfish, and amberjacks were also taken by the inshore fleets.

Fishing was very slow and spotty from the Bonner Bridge catwalk and along the beaches of Pea Island. Only small flounder, spot, and croaker were randomly reported.

Beach fishing along the northern beaches of Hatteras was not all that great because of a fair size swell that was coming to shore.

Fair bites of red drum of all sizes, including some citations, continue to be reported from the tri-village beaches and along the beach from Ramps 23-30. I say fair, because this is not a normal occurrence during these hot summer months, but I am sure the anglers who are lucky enough to catch one are not unhappy.

Scattered, small croaker, spot, and flounder are still being taken on bloodworms. Taylor bluefish and a scattered Spanish mackerel have been taken on lures and bait.

The Rodanthe Pier had a scattered, mixed bag of fish that included some black drum, sea mullet, spot, and croaker. A few decent runs of Spanish mackerel did occur over the past several days and a few triggerfish were decked.

Small spot, croaker, and sea mullet were caught from the Avon beaches and the Avon Pier.

The Avon Pier live baiters were blessed with one citation tarpon and king mackerel over the weekend, along with a few good runs of Spanish mackerel and bluefish.

Buxton area beaches did see some small spot, flounder, sea mullet, and a couple puppy drum. However, there were several nice runs of bluefish and Spanish mackerel in the area.

Fishing along Frisco beaches was slow and scattered overall.

Hatteras area beaches and the inlet did have a few good runs of Spanish mackerel and bluefish, but the overall bottom fishing was scattered. A few nice sea mullet were taken on bloodworms, along with scattered puppy drum, pompano, spot, and croaker.

The flounder gigging in the inlet area remains very good.

The Hatteras fleet has been banging away at the wahoo, with lots of the reel-burning fish being caught. The mahi bite is scattered, but the sailfish bite has been really good. The occasional white and blue marlin has been caught and released.

The Hatteras inshore boats have been catching some puppy drum, speckled trout, gray trout, and sheepshead.

Ocracoke had some really good pompano fishing, with lots of near citation fish caught on shrimp and sand fleas. Lots of 2-pound bluefish were caught on lures. The overall bottom fishing was slow.

The inshore boats in the area did well with citation pompano and good catches of blues and Spanish mackerel.

And, like Hatteras Inlet—Ocracoke was doing very well with the flounder gigging.

I continued to do very well with 2- to 4-pound bluefish and scattered Spanish mackerel while kayaking in the Cape Point area. The sharks in this area are like nothing I’ve ever seen before, and I can only say that there are thousands of them. So, if you are into sharking, now would be a good time to soak some baits.

The extended forecasts on Weather Underground showed a cooler and sunny weekend, with the highs around 80 degrees and a moderate northeast wind.

The one thing that remains in question for the late weekend and parts of next week will be whether or not we get big swells from Hurricane Danielle. This remains to be seen, but I am sure the surfers will be happy if we do.

So, the fishing is slow, but the weather is going to be great. Head on down and wet a line, because the catching can change at any moment.

Until next week—tight lines and fair weather.