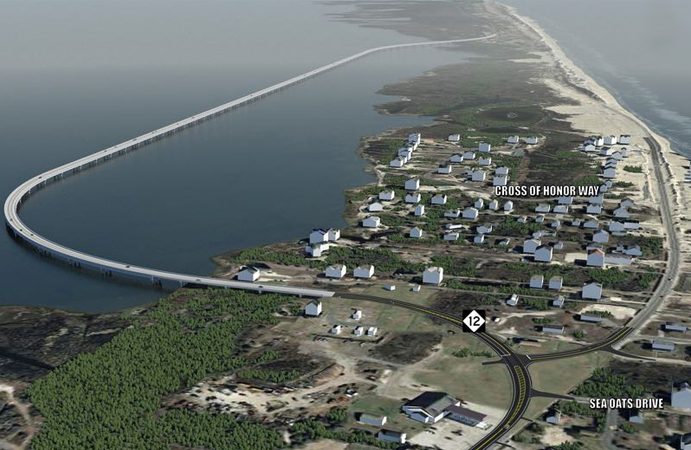 Construction is underway at the new 2.4-mile “Jug Handle Bridge,” which will extend from Rodanthe to the Pea Island National Wildlife Refuge, and which will bypass the current S-Curves section of N.C. Highway 12. Jutting out into the Pamlico Sound, the bridge will alleviate future road closures in the northern Rodanthe area, which is prone to oceanside flooding during storms.

The first pilings were driven into the ground on the Rodanthe terminus of the new bridge in early September, where construction work is currently concentrated. Per Tim Haas, NCDOT Public Relations Officer, crews are currently focused on the Rodanthe end of the new bridge, but will eventually start working at the northern Pea Island terminus as well.

Construction will continue on the land-based portions of the bridge before moving out into the open water. Based on the current schedule, the bridge is expected to open to traffic by late 2020.

The bridge earned its “jug handle” moniker from its distinctive shape that curves outward into the Pamlico Sound before reconnecting with N.C. Highway 12 north of Rodanthe. NCDOT also proposes building a one-lane roundabout at the end of the existing N.C. 12, and by the relocated N.C. 12 near the refuge.

The new bridge, along with the Capt. Richard Etheridge Bridge on Pea Island which was completed in the spring of 2018, is considered part of the second phase of the Bonner Bridge replacement project.

Staging for the jug handle bridge, or the initial portion of the overall project, began earlier this summer.