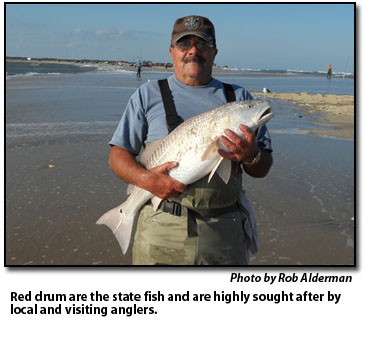 Well, fishing folks, it seems like an eternity since I’ve had anything to really report. That is a hard admission for a guy whose entire life revolves around fishing. I love to fish, I love to see others fish, and, most importantly, I love to catch fish.

However, the swell and weather from offshore hurricanes and tropical depressions have made a hard go of things for almost two weeks.

During that time, there wasn’t much to report. Most local and visiting fishermen could only peer out over the water or through a window and hope that the weather would break soon.

Now, finally, there seems to be a break, and it seems the fishing is gradually getting better and back to normal for the fall.

Oregon Inlet Fishing Center reported scattered yellowfin and blackfin tuna, along with some mahi-mahi mixed in. The boats have only recently been able to get back out, so it will take a day or two before we can really see what is going on.

The inshore boats around Oregon Inlet have done quite well with red drum and speckled trout. They have reported some really good catches of both.

Rough swell and lots of current kept fishing slow and scattered on Pea Island, at the Rodanthe Pier, on the beaches of the tri-villages, and along the beaches from Ramp 23 through Avon. But there were scattered bites of blues, puppy drum, some small flounder, black drum, a few pompano, and a friend even managed to find a few throw-back and keeper speckled trout.

For those red drum hunters out there, the drum have begun to make an appearance at Cape Point. There have been some fair catches of yearling drum, along with some low-end citation fish caught.

The Frisco area beaches have had some scattered sea mullet, small spot, small croaker, and puppy drum. There was a 2 1/2-pound pompano weighed in at Frisco Rod-n-Gun.

The boats out of Hatteras have not been able to get out because of shoaling during September storms that made the channels almost impassable. I spoke with some of the guys this morning, and they were running trips for the first time in a week. So, hopefully they will have some good reports for us next week.

Tradewinds Tackle on Ocracoke reported some black drum, pompano, nice-size bluefish and scattered puppy drum during the day. Some really nice-size red drum are being taken after dark on the South Point.

So, as you can see, the fishing is not all that hot and heavy just yet, but anything and everything is a vast improvement to what it has been.

Weather forecasts look great this upcoming weekend, with warm temps, sunny skies, and mild winds. So, get in your cars and trucks and come on down to our magnificent islands.

Until next time—tight lines and fair weather.