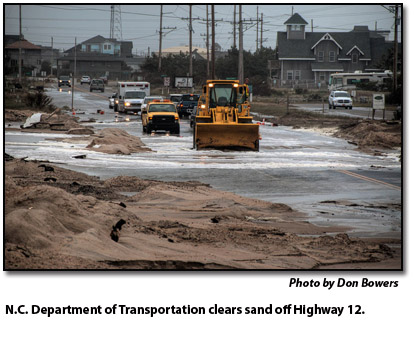 A coastal storm that moved off the North Carolina coast on Friday and then intensified brought high northeast winds and heavy seas to coastal areas on both Friday and Saturday.

There was ocean overwash in Mirlo Beach in north Rodanthe at high tide Friday and Saturday with several inches of water on Highway 12 at times.

The North Carolina Department of Transportation had crews and equipment scraping sand and debris off the road in north Rodanthe and on northern Pea Island, just south of the Bonner Bridge.

The water was rough and the current swift in Pea Island Inlet, but there were no problems with the temporary bridge there, and sandbags successfully protected the Cape Hatteras Electric Cooperative temporary power poles, which are at the water’s edge on the inlet.

CHEC is working on installing permanent power poles in the Pea Island Inlet area that will be farther from the water, taller, and sunk in concrete caissons. The power company hopes to switch to generator power this week on Hatteras and Ocracoke while lines are moved to the permanent poles.

Buxton, Avon, Rodanthe, Waves, and Salvo will have a planned power outage from 5 to 5:30 a.m. Tuesday morning, Nov. 8, while the power company switches to generator powers.  Generators will power the islands for three to five days.

There was a power outage early this morning, Nov. 6.  According to CHEC, there was a problem at the Buxton step-down station that caused an outage in Frisco, Hatteras, and Ocracoke for several hours, beginning at 1:44 p.m.

The diesel generators were successfully started and were powering those villages today.

Also, the Pamlico Sound ferries, which shut down in high winds on Friday, resumed operations today between Ocracoke and Cedar Island and Swan Quarter.

Officially at Billy Mitchell Airport in Frisco, the automated weather observation station clocked sustained winds of 25 to 30 mph on Friday and Saturday with gusts to 43 on Friday and 47 on Saturday.

However, the winds gusted higher than that, according to other wind gauges on Hatteras.  One gust in Hatteras village in the early morning on Saturday was clocked at 59 mph.