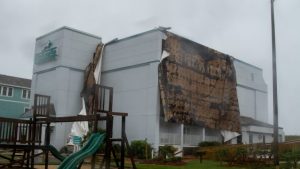 The storm caused “significant, widespread, storm‐related property damage as a result of high winds and soundside flooding from storm surge,” the county said in a damage estimate report.

Sustained hurricane and tropical storm force winds over a period of about eight hours Friday, Sept. 6 caused very high water levels on the sound throughout the county, particularly areas south of Oregon Inlet.

The damage was spread across most districts and was all very similar in nature.

The villages of Avon, Buxton, Frisco and Hatteras at the southern end of Hatteras Island witnessed the most flooding, the report said. High winds caused significant siding, roof and shingle damage in all districts, as well as substantial property damage from fallen trees on structures.

“Debris removal could be significant due to widespread vegetative and flood‐related debris,” the report said.

Besides damage to homes and buildings, there was considerable damage to cars, boats, campers and recreational vehicles. Those damage reports are not part of the report released Tuesday.