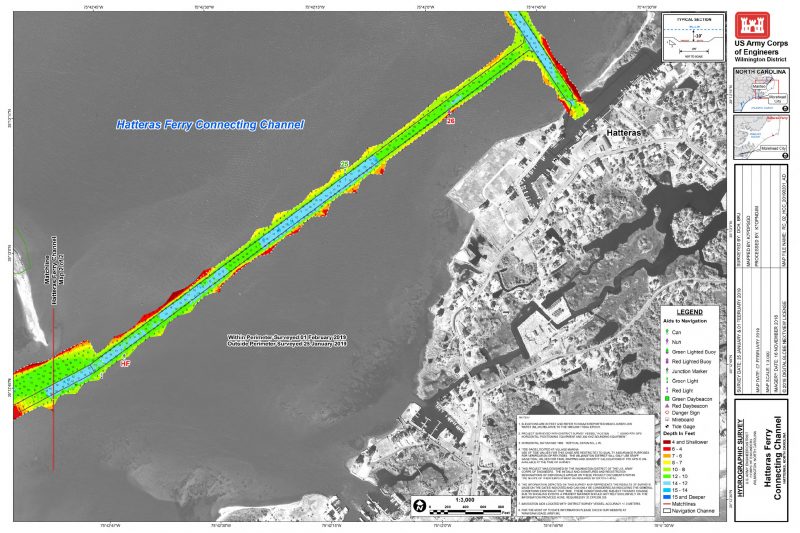 The latest round of dredging in Hatteras Inlet, which included dredge work at Rollison Channel to the breakwater in Hatteras village as well as the South Ferry Channel, has resulted in a clear path for mariners, per an update at the February 11 meeting of the Dare County Waterways Commission.

Steve Shriver, team leader of the U.S. Army Corps of Engineers’ survey section, presented an overview of the latest dredging event in Hatteras Inlet, which spanned from mid-January through early February.

“We will be running another survey of the Rollison Channel in a couple months,” he added. “From what we’ve seen [in the past], an increase in vessel traffic helps to maintain it.”

“I’m thrilled we got the shoal at the breakwater,” said Commission Member Dan Oden. “We all are. Ernie [Foster] watched every minute of it.”

Newly appointed Chairman Steve “Creature” Coulter added that since the latest dredging event, he had not heard of major difficulty navigating from Hatteras village through the inlet.

“I haven’t had many people complain about it,” he said, “but there’s not many people going out right now.”

Chief Petty Officer Ryan Agre reported that the U.S. Coast Guard had placed temporary aides in the recently dredged areas, and planned to replace these with fixed aids once the Coast Guard Cutter, the Smilax, was back in service in April.

Plans were already in the works for a second round of dredging in Hatteras Inlet before the permitted dredging window ends on March 31, per an update from Ken Wilson, Client Program Manager of APTIM Coastal Planning & Engineering. The firm had been working with the county in the past several years on a range of projects, which included orchestrating a number of dredging events throughout the Outer Banks.

“We were [originally] hired to get permits for the Connecting Channel in 2016, and our job is to set things in motion,” said Wilson. “We coordinate with the state, the Corps, and other organizations… and our firm is very much involved with county coastal and navigation issues.”

Wilson provided a history of the past two years of dredging events to the Dare County Waterways Commission, which outlined the timeline and project volume of each endeavor.

“You are constantly in the heat of battle… and we wanted to give you a bigger picture of how we are fighting the war,” he said.

Per Wilson’s presentation, dredging events have occurred, on average, every six months or so for the past two years in the Hatteras Inlet area, and the volume of material removed for each event has remained roughly the same at an approximately 17,000 to 20,000 cubic yards per dredging project.

“The next event is scheduled for mid to late March, depending on the Corp’s schedule,” said Wilson.

“This is what we’ve been working on for all this time,” said Commissioner Oden. “The history shows that if we stay after it, we can keep going.”

With the South Ferry Channel and Rollison Channel in decent shape, the commission turned their attention to Oregon Inlet and the upcoming demolition of the old Bonner Bridge.

Once the demolition project occurs, which is slated to begin shortly after the new bridge is complete and open to traffic, material from the old bridge will be transported to varying artificial reef sites in the Oregon Inlet area. As such, the barge removing the debris and the associated equipment will need a clear path to transport material out into the open ocean waters. 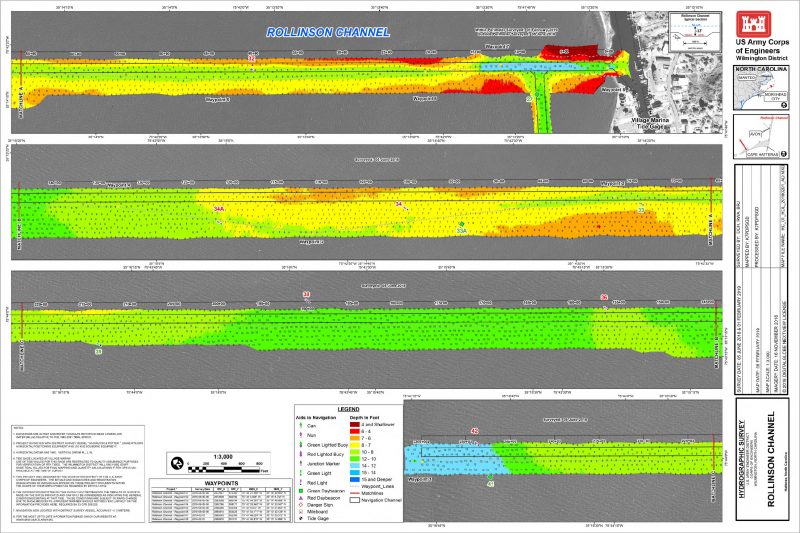 Shriver reported that the Shallow Draft dredge Murden was currently working at Oregon Inlet, and would stay at the site, provided that it could continue working without obstacles. “We will be at Oregon Inlet and will see if [the Murden] can break through the span,” said Shriver. “We should be able to make a decision by the end of the week whether we can keep going, or if we’ll have to [leave.]”

“There’s a lot of pressure to get this cleared,” said Couch in regards to the upcoming demolition of the old Bonner Bridge. “[All the material] has to go out into the ocean.”

It was also noted at the meeting that the two-year maintenance contract for Hatteras Inlet has been sent to the state for approval, and that the Manteo Channel contract would go to Dare County on Tuesday, February 12.

“We’ll know by the end of the week if we have a fully executed contract,” said Wilson.

Finally the Dare County Waterways Commission appointed a new member to take the place of Commissioner Chair David May., who stepped down from his position in early 2019.

The commission unanimously voted to recommend to the Dare County Board of Commissioners (BOC) that Michael Flynn of the North Carolina Coastal Federation fill the vacancy, and the commission’s recommended appointment will likely go to the BOC for final approval at their next meeting on February 19.