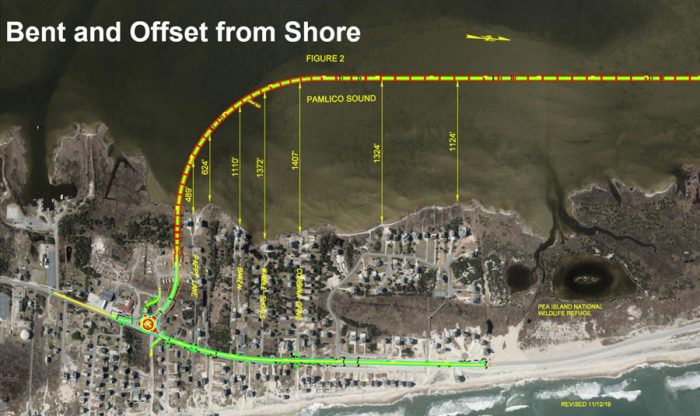 NCDOT representatives answered questions and provided an update on the Jug Handle Bridge at a well-attended community meeting in Rodanthe on Thursday night.

The 2.4-mile Jug Handle Bridge will stretch from the southern portion of the Pea Island National Wildlife Refuge to northern Rodanthe, and will bypass the S-Turns section of N.C. Highway 12, which is highly susceptible to breaches during storms. The new bridge – along with the Captain Richard Etheridge Bridge and the Bonner Bridge Replacement – is considered part of Phase II of the Bonner Bridge Replacement Project, and is the last remaining bridge to be built of the three individual projects.

At the meeting, Bonner Bridge Project Resident Engineer Pablo Hernandez reported that the Jug Handle Bridge is roughly 24% complete, and that construction remains on schedule.

“Right now, we are still targeting an early 2021 timeframe for completion,” said Hernandez. “This may shift, however, due to weather and other factors.”

The Thursday night meeting, which had multiple representatives from the NCDOT in attendance, began with answers to public questions that were brought up at the last informational meeting on September 25.

Diane Wilson, Senior Public Involvement Officer for the NCDOT, stated that when the bridge is complete, the current 1.8-mile stretch of N.C. Highway 12 that will eventually be bypassed will be returned to the Pea Island National Wildlife Refuge. As such, after the bridge’s completion, any sandbags that were originally used to protect the former highway in this area will be removed. Any sandbags protecting N.C. Highway 12 from the northern terminus of the bridge northward will stay in place to continue to protect the roadway.

Wilson also provided an update on the height and all dimensions of the new bridge. The NCDOT contract requires that the elevation of the bottom of the lowest beam or girder of the main bridge to be 17 feet above mean sea level (MSL) or higher. Based on the MSL in the Pamlico Sound, the bridge will provide approximately 17 to 19 feet of clearance under the lowest beam / girder, the bridge deck will be approximately 24.5 feet above the MSL, and a 3-foot high parapet wall and 2-foot bicycle rail will also be added, bringing the total height of the bridge to 29.5 feet above sea level. 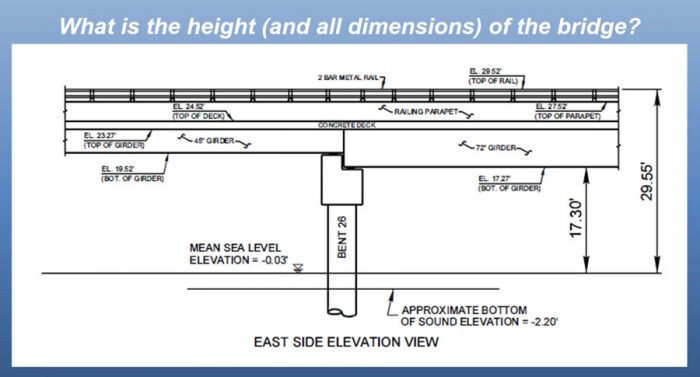 Prior concerns about notifying residents and visitors when pile driving will occur were also touched on, with Wilson noting that, per the contract for the bridge construction project, pile strikes will not occur between 9:00 p.m. and 8:00 a.m. There can be possible pile driving on any day that construction activities are occurring, however, and a schedule of planned construction activities for the coming month can be found online at https://www.ncdot.gov/projects/nc-12-rodanthe/Pages/planned-construction.aspx.

Pappy Lane was also a concern brought up at both the September 25 and December 5 meetings. Wilson reported that the contractor’s staging area is graded and sloped so that water does not flow towards Pappy Lane and instead goes towards the south. She stated that the contractor intentionally sloped the staging area this way to avoid draining water into the wetland areas, and to contain water runoff within the NCDOT right of way and staging area. She also noted that Pappy Lane could not be closed to the public, despite people going to the road to watch the construction, as it is not a state route, and NCDOT therefore does not have the authority to shut it down.

After answering outstanding questions from the September meeting, Hernandez proceeded to provide an update on the current project status.

On the north end of the Jug Handle Bridge project, erection of the first section of the work trestle is nearly complete, and the trestle will be up and running soon to begin construction into the open waters of the Pamlico Sound.

Earthwork for the roundabout is also underway, and weather permitting, work will continue with additional paving and concrete work planned for the winter months. One-lane closures will be needed for various operations during work on the roundabout connections to N.C. Highway 12, and adjacent side streets.

In addition, Stage 1 of the relocation of the Dare County water line at the south end of the bridge is complete, and Stage 2 is likely to take place during the fall of 2020. NCDOT is also working with CHEC and other utility companies to eventually relocate their lines to the new bridge.

After the update, NCDOT representatives fielded questions from community members in attendance. Several questions were asked about the recent concrete piling that had to be unloaded from a truck that ran off the road and into the sand along N.C. Highway 12 on Nov. 4.

“As that truck was negotiating that slight curve on Highway 12, the dolly drifted slightly off the road,” said Hernandez. “As you know, that area has no shoulder, [so the] dolly drifted off the road, and got into the soft sand, and basically that soft sand locked that dolly in place and dragged the piling off.”

“The Indication we got was that [the driver] was trying to hug that curve [so the] dolly would stay in that lane, and there was oncoming traffic that hadn’t gotten over as far as they should have … the driver was having to [try to] maintain the truck with oncoming traffic.”

NCDOT representative also addressed questions regarding the recent flooding and N.C. Highway 12 closures that accompanied nor’easters in late October and mid-November. “It’s not your responsibility, but from our perspective, people were trying to get on or off the island, and the communication was lacking,” said one public commenter.

“The challenge with maintenance and communication is ever changing,” said NCDOT Division 1 Engineer Jerry Jennings. “If we send a press release that the road is closed, by the time the press release is out, it could be open again.” Jennings said that social media will be used more to inform the public of emergency closings and openings of N.C. 12, and that close communication with local personnel in Dare County is ongoing. “We have a meeting with them that is scheduled soon, and that will help clear up [these questions],” he said.

NCDOT representatives also noted that upcoming utility work may require power outages in the future. The public will be notified if and when such outages are required.

Roughly 35 people attended Thursday night’s meeting, in addition to a number of virtual attendees that accessed the meeting online.

The next community meeting on the Jug Handle Bridge Project is scheduled for March 5, 2020.