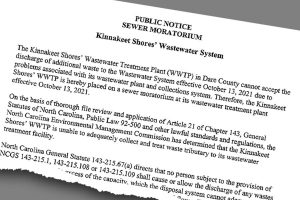 Several residential and commercial development projects in Avon are likely to be held up in the coming months due to a sewer moratorium that state regulators recently issued to a privately-owned wastewater treatment plant.

The treatment plant, which was found to be noncompliant with previously issued state permits, serves an area of Avon that includes roughly 180 properties on the soundside of the Kinnakeet Shores community. The plant also serves several commercial businesses, including those in the Hatteras Island Plaza, Sun Realty, Ace Hardware, and the Avon Post Office.

Existing businesses and homeowners have maintained sewer services during the moratorium, which took effect Oct. 13, and the treatment plant is still fully operational, residents said. But because the sewer plant is prohibited from taking on more capacity, new construction cannot move forward because developers are not able to gain a sewer acceptance letter, which is needed to obtain a building permit and begin construction.

Those affected include several property owners and developers that either recently purchased vacant lots in the Kinnakeet Shores subdivision or are looking to rebuild on existing lots.

The moratorium comes at an “extremely bad” time, as the Kinnakeet Shores community has seen a boom of vacant lot purchases over the past year, said Ray Barto, a member of Kinnakeet Shores’ Board of Directors. He estimated that they have sold 70 to 80 lots in the last 12 months.

“Construction and lot sales have gone through the roof in the last nine months to a year, it’s incredible. We’ve never had anything like this going on,” said Pat Weston, longtime president of Greater Kinnakeet Shores Home Owners, Inc.

The moratorium could also delay development of homes at the Otter Point subdivision, which contains several dozen soundside homesites that would be tied into the treatment plant, according to Weston.

Barto and Weston noted the moratorium could impact a plan to demolish the vacant RC movie theater at the Hatteras Island Plaza and replace it with multi-family housing. The project, which many hope will bring much-needed affordable housing to the area, is currently pending county approval.

The treatment plant is owned and operated by developer Ray Hollowell Jr., who owns the plant under the name, “Outer Banks/Kinnakeet Associates, LLC.” State regulators inspected the facility on Aug.17 and determined the plant is “unable to adequately collect and treat waste tributary,” according to a Aug. 25 letter sent to Holloway by the state Department of Environmental Quality’s Division of Water Resources.

“Both clarifiers, the tertiary filter, spray irrigation system, and back-up generator are not functional. Biosolids have not been removed from the plant for at least seven years,” the letter read. “Therefore, the Kinnakeet Shores’ WWTP is hereby placed on a sewer moratorium (with no new sewer taps, sewer extensions or additional flow) at its wastewater treatment plant effective October 13, 2021.”

Holloway did not respond to multiple voicemails.

Though the state letter refers to the plant as the “Kinnakeet Shores Wastewater Treatment Plant,” Barto and Weston explained that the resort community has nothing to do with management of the plant. The plant, they said, is owned entirely by Hollowell. They claim Hollowell has not performed proper upkeep at the plant over the years, leading the state to step in and enforce a moratorium.

“The best way I can sum it up is just dedicated neglect,” Barto said. “I think he just hasn’t paid attention to the sewer plant over all these years. Everyone pays their sewer fees, and I don’t think he’s put anything back into the sewer plant.”

The moratorium will remain in place until the plant meets all the conditions of previously issued permits and ownership has obtained written permission from the North Carolina Environmental Management Commission, the state’s letter read.

Weston believes it will be “a while” until the moratorium is lifted, while Barto said he is optimistic that the amount of development currently being held up will compel the county to intervene.

Dare County Manager Robert Outten said the county has been actively monitoring the situation and has had contact recently with the state Division of Water Resources, the state utilities commission, and the Kinnakeet HOA. But he added that the county is limited in what it can do and has no enforcement power over the privately owned facility.

“We don’t really have any tools other than to be able to give input and push people to move quickly so that we can get the problem resolved,” Outten said, adding that the county has not had contact with Hollowell. There is a private enterprise, according to Outten, that has expressed interest in purchasing the plant. The county, he said, is not interested in any sort of purchase.

“We would not prefer to be in the sewage business,” Outten said. “That’s a nightmare business and not something you choose to be in if you can help it.”

While Dare County could stand to lose revenue from a development standstill, Outten said his primary concern right now is to assist those impacted.

“If you’re a property owner and you purchased a lot that you were preparing to build and you spent money relying on your ability to have that sewer and now you don’t have it, that’s not fair or reasonable or right under any set of facts,” Outten said.