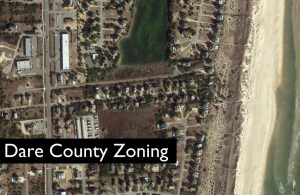 Half a year after the Dare County Commissioners approved a series of zoning changes aimed at encouraging the development of more reasonably priced, year-round housing, Dare Planning Director Donna Creef told them that, to date, progress toward that goal has been modest.

“We have been moving slowly,” Creef said while delivering a six-month progress report at the April 15 commissioners meeting. In fact, she said, during that period, no permit applications were received for the newly allowed accessory dwelling units (ADUs), duplexes or multi-family structures. The two site plans submitted and approved were for cluster homes, both on Hatteras Island, for a total of nine structures.

For his part, however, Commissioner Danny Couch said the cluster homes “have been quite a step forward. Two big projects. I see success.”

The push to encourage more long-term housing, which was launched by the Outer Banks Chamber of Commerce, made remarkable progress as it moved from a proposal to law in a matter of a few months. The chamber leaned heavily on the economic argument that the local housing crunch, combined with high real estate prices, was making it hard to attract good workers to Dare County and adversely impacting local businesses.

In her progress report, Creef acknowledged that six months might be too short a period of time in which to “adequately evaluate whether they’re successful or not.” ADUs, she said, could also involve an issue with the fact that “folks don’t have the capacity on their property to expand their wastewater systems…And that’s a state regulatory issue that we can’t necessarily influence or change.”

House Bill 268, now in its early stages of moving through the General Assembly, does seek to change these statewide septic regulations.

As if to highlight the need to potentially make additional zoning changes to encourage more housing, Creef also outlined some new options for the Dare County Planning Board to consider.

These options include expanding cluster home developments and ADUs to include single-family zones and developing an overlay district to meet the identified need for “educational housing” in support of the Coastal Studies Institute (CSI), the Dare Board of Education and College of the Albemarle (COA). Another possible idea is to look into reducing minimum lot sizes from the current 20,000 square feet to 15,000, 12,500 or as small as 10,000 square feet in view of the fact that most of unincorporated Dare County now has central water.

Couch said that the overlay district option is especially important, given the “need for housing for students and teachers.” Adding that the county has invested a lot of money in both CSI and COA and “we have a lot at stake,” Couch urged the county to “do what we have to do” because “if we’re still addressing the issue of where we’re going to put them, they’re not going to come to school here.”

Following a discussion, Creef said she would omit expanding ADUs into single-family zones due to the likelihood of conflicts with homeowners’ association covenants, but that she would present the other options to the Planning Board for its review and for drafting specific zoning amendment language. That would be followed by public hearings, with a period of three to four months before she would report back to the board.

Asked for her assessment of the progress “six months in” in regard to the zoning amendments, Chamber CEO Karen Brown was optimistic.

“The changes in the zoning ordinances have certainly opened up additional opportunities for housing developments,” she said. “Every additional unit we can get in the inventory for a year-round or seasonal rental for our employees is important and helps.”

She also emphasized that the chamber is not done working on the housing issue. “It’s important to keep moving forward and find some other solutions too,” she said. “The biggest message is that we haven’t stopped with the zoning changes. We have some other ideas that we’re trying to work through, and right now we’re in the very early stages.”

“I think everybody has come to recognize this as a significant issue for us,” she continued. “And certainly, to me, it’s our number one economic issue. If we can solve some of these housing challenges, that will allow more jobs to be created because people can find a place to live.”