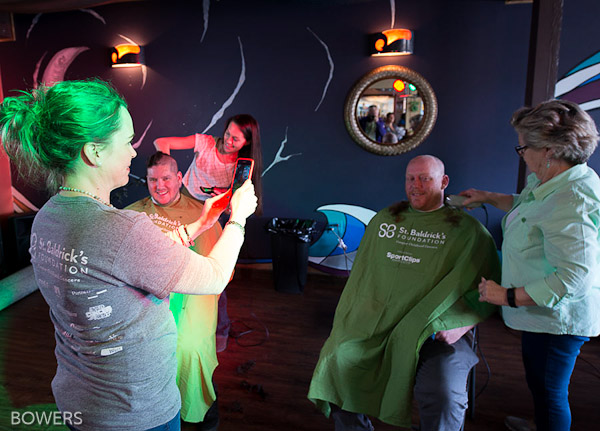 The annual St. Baldrick’s Day head-shaving event is returning to Turner’s High Moon Bar in Avon for the second year in the row, and there’s still time for potential shavees to sign up and raise funds for childhood cancer research grants – just by going bald.

The March event, which is affectionately referred to by a number of Avon local men as their “annual haircut,” raises both awareness and money for the St. Baldrick’s Foundation, a volunteer-driven charity that, locally, has received dedicated support and thousands of dollars in donations over the years.

The St. Baldrick’s Day celebration celebrates its 13th year on Hatteras Island in 2019, and the sheering will commence on March 23 from 4-7 p.m. Shavees can register online at https://www.stbaldricks.org/events/Avon2019 to raise donations before they take the plunge, and the Turner’s High Moon Bar locale ensures that liquid courage will be available for those that need an extra boost of determination before they go under the razor.

The event’s local roots technically began about 15 years ago, when Tina Chandler and her daughter, Maddy, attended the Norfolk-based event while her daughter was undergoing chemo, and it simply grew from there. For several years, some Avon locals would make the drive up to Norfolk every March to participate, until they decided to simply stage their own event closer to home.

The first St. Baldrick’s in Avon was held at the former Avon Surf Shop, with Chloe Sapecki as the event’s lone barber. It eventually moved to the Avon Fire Station as more and more attendees signed up to have their heads shaved clean for a good cause.

Last year, after roughly a decade at the Fire House, the event moved to a new home, complete with cold drinks, temporary barber chairs, the NCAA basketball tournament playing in the background, and even flashy lighting to set a festive tone.

Participants of all ages and genders are always welcome to participate, and last year’s St. Baldrick’s Day saw brave shavees as young as 3-years-old.

For more information, potential shavees and their cheerleaders can check out the St. Baldrick’s Day’s event page on Facebook at https://www.facebook.com/events/364119504422641/.