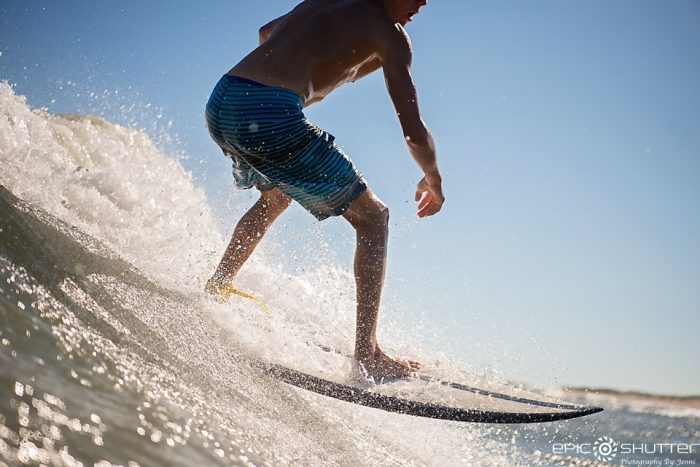 We have certainly seen the negative effects of Hurricane Dorian on the Outer Banks, and it was only three years ago that Hurricane Mathew devastated Hatteras Island in October.  The Atlantic Ocean has seen a boost in activity due to the end of a routine climate pattern known as “El Nino,” and NOAA stated early in the season that oceanic and atmospheric conditions would favor above normal activity by 45%.  Predicting 10-17 storms, we have already seen 11 named storms, 8 tropical depressions, and 2 major hurricanes.  Most recently, we can credit the churning of the Atlantic Ocean producing large waves to Hurricane Humberto and Lorenzo, which still remains well offshore.

Last week, Humberto, which had sustained winds of 115 mph, recently skimmed the East Coast, and brought along high surf advisories, high rip current threats, and huge waves that have impacted the entire coastline.  For some, that isn’t a bad thing, and one of the most common questions we hear during hurricane season is “Why would you choose to live in Hurricane Alley?” The answer is simple, and easily seen from the shore for diehard surfers, body boarders, windsurfers, and kiteboarders: Hurricane Swell.

I traveled all over Hatteras Island this week; up, down, and all around. As soon as I turned north on Highway 12, I am immediately halted by a man running across the road towards the beach, surfboard and beach towel in hand, excitement in his step. Sprinkled between the remaining Cape Hatteras Electric Cooperative trucks, like salt and pepper, are trucks, SUVs, cars, the heads of happy dogs hanging out of windows, and even an RV, all laden with surf racks loaded down with boards.  I am always especially delighted to see the occasional highly committed, multi-talented surfer welding a surfboard while riding a bicycle.  Ebbing and flowing from the beach, board tucked under arm, legs pumping the pedals, and smiling from ear to ear.

Most people have been at the usual “sweet spots” over the past week. Cars have been pulled off the sides of the road just south of the Bonner Bridge, along the area affectionately known as “The S Curves.”  (Mirlo Beach has been going off!)  It feels like pulling up to a music festival with all the cars pulling on and off the sides of the road, and people jumping out of vehicles with eager faces walking to the beach, all geared up.  When asked, local surfer and native Kinnakeeter, Andrew Hines, claimed, “The break is always going off at Mirlo Beach.” He enthusiastically recounted to me that the waves “…had strong, 8 ft. faces”.  He also stated that the strong ocean waves had eroded the sand from the beach all the way to the dunes, leaving very little shoreline for onlookers and sunbathers.   The parking lots at Ramp 27 and Ramp 28 have been at or close to maximum capacity. The Avon Pier area is always a sweet spot, and the ocean near there has looked like a sea of surfers and groms alike.

Local surfer, Dave Darnell, had this to say about his week in surfing: “The past few days, the waves were really good! On Saturday, they were 8-9 ft.  The rip current was kind of strong on the inside sections, [but] once you got outside to the second or third sandbar, [there] was no rip current.  The water was warm, the waves are very strong.  [Then] a couple days later, the ocean was beautiful, clean, super glassy [and] about 5-6 ft. with no rip current at all. A surfer’s dream!”

Although it is officially fall, warm and dry weather has been predicted by NOAA for the Eastern U.S., with above average temperatures all week.  This week has been beautiful, sunny, and clear on the Outer Banks.  The water temperature has felt almost the same as the air temperature, taking the wind into account, at an average in the mid-to-low 70s.  The wind has been steady around 10 mph, blowing from the northeast, and keeping those pesky yellow head flies at bay.  With the sunrise at around 7 a.m. and sunset around 7 p.m., the avid and amateur surfer has an opportunity to catch the evening sunset session if he misses the sunrise swell.  However, every day has been a great beach day whether you have the entire day to devote, or just a little time to spare.

With the unique drawbacks of living in a hurricane prone area, it’s nice to see our neighbors finding the positive, and embracing it.  It’s nice to finally experience that one day that seems to make it all better.  Because every once in a while, the winds, tides, and sandbars line up just right for HURRICANE SWELL. For some, that reason is enough to not only live here, but love to live here. After all, I can’t think of anything that says “Fall on the Outer Banks” more than hurricane swell.

Soundside flooding has receded on N.C. Highway 12 and the roadway is open and passable throughout Hatteras and Ocracoke Islands, per a Tuesday morning update from the North Carolina Department of Transportation (NCDOT). “Things are looking a lot better on NC12 today,” stated the 7:30 a.m. social media update. “Soundside flooding has receded, with only [...] Local News |  Full Article

After six months of meetings, a subcommittee of the NC12 Task Force has reached a consensus on what areas of the vulnerable road that connects Ocracoke and Hatteras with the northern Outer Banks should be the top priorities for keeping the transportation link open. At its Jan. 13 meeting, the subcommittee focused on five areas of concern: [...] Local News |  Full Article

Are you interested in gardening? Here’s a way to make your winter blues go away. Start planning your spring garden now with the Library Garden Series presented by the North Carolina State Extension’s Dare County Master Gardeners in conjunction with the Dare County Library. This year’s programs will all be held virtually via Zoom, and all [...] Community News Brief |  Full Article

N.C. Highway 12 remains open as of Monday morning, but soundside and/or oceanside flooding has been reported in multiple areas, per a 7:00 a.m. update from the North Carolina Department of Transportation (NCDOT), and the roadway may not be passable for all vehicles. Travel is not advised at this time. Conditions along the roadway per [...] Local News |  Full Article

The public is advised to avoid travel on Sunday night if possible, as sand and standing water have been reported on multiple stretches of N.C. Highway 12, per a 7:30 p.m. update from the North Carolina Department of Transportation (NCDOT). “There is currently strong wind and heavy rain at many locations on Hatteras Island,” stated [...] Local News |  Full Article

A Coastal Flood Warning, High Wind Warning, High Surf Advisory, and Storm Warning have been issued for the Outer Banks, due to a coastal storm that is expected to impact Eastern N.C. on Sunday and Monday, per a recent briefing from the National Weather Service Newport / Morehead City office. Moderate to minor ocean overwash [...] Local News |  Full Article

Confidence is increasing that the Outer Banks will see impacts from a strong low pressure system on Sunday and Monday, per a recent briefing from the National Weather Service Newport / Morehead City office. Minor ocean overwash is possible from Duck to Cape Hatteras on Sunday and Monday, and N.C. Highway 12 could be affected, [...] Local News |  Full Article

2021 marked the 18th year that Pirate’s Cove Realty and the Pirate’s Cove Homeowners Association have come together to generously provide wishlist gifts as well as a monetary donation for local foster children throughout the Dare County community. In 2021 alone, the two Pirate’s Cove organizations provided gifts for 13 children and donated $3,500 in [...] Community News Brief |  Full Article