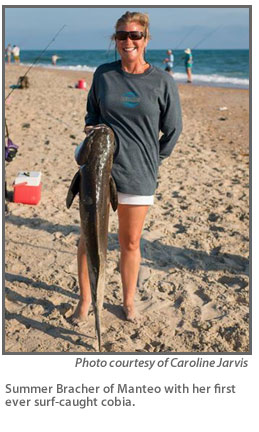 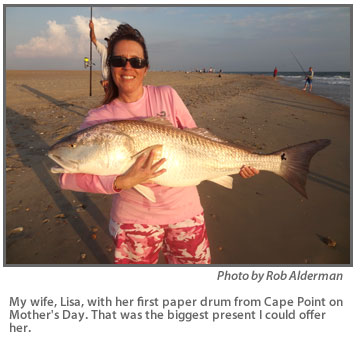 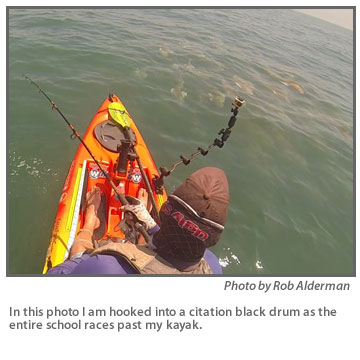 Before I get to the cobia report that I am sure everyone is dying to know about — and if you haven’t seen the pictures swamping the Internet, then you may want to look around a bit– I want to touch on another subject.

In my past few columns, I’ve talked about the off-road vehicle closure at Cape Point and getting there on foot.

I’ve personally been wanting to get out there, but in a family of four with three of us having different work schedules, that is easier said than done.

However, my family and I finally made the walk out last Sunday.

We parked next to the closure and loaded up a few backpacks and our rods.

It took just over 10 minutes to walk out there from the closure. You can simply walk down below the closure line and follow it out until the area reopens fully.

As we approached the Point, I could already see an angler hooked up with a drum.

I had only one mission–to help my wife and stepdaughter catch their first Cape Point red drum.

We began to fish hard and the drum began to steadily be caught and after a while, I had accomplished my goal of helping my family get a big one.

The weather was beautiful that night and there were about 40 or so people out there.

My friends had told me during Friday and Saturday night that those numbers were about 70 to 80 people.

So, it is obvious that some are not allowing the closures to hinder their fishing but so much.

It is very sad to see the closures and understand how that affects so many individuals and families that have constraints that make the walk almost impossible.

That night, I saw close to 60 drum get caught and if the normal ORV crowd had been out there, those numbers would have been much higher.

Some will argue that there are other open areas where you can catch a citation red drum and other species and that is true.

The closures that affect Cape Point and other areas of the local beaches are nothing less than a travesty to the angling community and the public in general. There are just as many good methods to protect the wildlife and ensure access to the public, as seen all over the East Coast in state-run parks and other coastal communities.

Maybe one day, the powers that be will come to their senses and rethink the current management plan.

After seeing so much life on Cape Point Sunday night, I immediately came home and loaded my kayak onto my truck, so that a friend and could make a run to chase some fish in the shoals.

We made the launch at the closure at Ramp 49 and made the three-mile stroke across to the shoals.

This route takes us straight through “The Hook,” which is considered prime fishing territory by surf and boat anglers alike. Unfortunately, “The Hook” is closed permanently year-round to all ORV traffic.

My friend, Matt Lusk, and I proceeded to spend the next 10 hours hunting open water and we covered roughly 13 miles over the course of the day.

We saw, caught, and lost citation red drum, black drum, cobia, false albacore, Spanish mackerel, bluefish, and more. It was further proof to me just how dynamic the fishing is in this area.

The closures within the Cape Hatteras National Seashore Recreational Area have stripped the public of a resource that few can possibly comprehend.

I’ve said my peace and I am moving on.

The Brown Bombers, the man in the brown suit or if you prefer – COBIA –have hit the area and they have hit hard.

Over the last several days, the reports of the cobia began to hit the Internet and pictures gradually started appearing everywhere.

These are a very aggressive fish and are highly sought after by anglers. Most inshore boats stay booked solid for cobia season, as anglers want to try their luck at sight-casting for these fish on the surface.

Cobias can range from 5 pounds to well more than a 100 pounds and they eat very nicely.

I know anglers that hire local captains for numerous outings or in some more extreme cases, for weeks. Yeah. That’s how serious this game is for the area economy.

While boaters will do the most damage to these fish, there have been some caught from both pier and surf.

In my days in the ocean of late, I have seen plenty of boats stalking these fish and I have witnessed my friend and stepson both hang into one from their kayaks, but both lost them.

Interestingly enough, these fish are moving ridiculously fast. At the start of last weekend, these fish were barely on top of Ocracoke and by Wednesday there were huge schools off of Rodanthe and Avon, with fish being seen from piers as far north as Avalon.

The cobia are heading straight for the Chesapeake Bay, where they will shoot inside for their spawning season.

Now, with reports of fish still being caught as far south as South Carolina, one has to wonder how long this season will last.

If you even think you want a North Carolina cobia, now is the time to make your move and start making calls to book a trip.

The offshore reports have consisted of good mahi-mahi fishing, along with some tuna and scattered billfish.

Now is the time we will see lots of life in the deep blue and that arena should be good for months to come.

The surf fishing on Ocracoke has been good, with reports of large and small puppy drum, a few cobia, and a variety of bottom fish.

Rodanthe and Avon piers have seen a variety of bluefish, Spanish mackerel, sea mullet, gray trout and at least one cobia has been caught from each.

Overall, the weather forecasts look fair and pleasant, though this is the Outer Banks and that changes with a light switch.

The weather is very warm and the water feels great. Get off the couch and come on down. Area businesses are ready to help you relax.

And always remember that a bad day of fishing is better than any day at work.