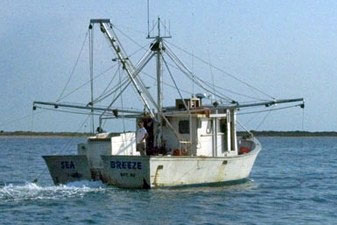 Almost two years after it surfaced, a proposal to radically curtail commercial shrimping is crawling through the state’s rule-making process.

The North Carolina Wildlife Federation petitioned the Marine Fisheries Commission for the new rules in November 2016, and after modifications, the panel accepted the request on Feb. 16, 2017.

Several changes would cripple the shrimp trawling industry, critics say, and would raise the size limit on spot and croaker so high that they would effectively eliminate both fisheries for recreational and commercial fishermen.

But the rule-making part isn’t on the horizon yet.

The North Carolina Administrative Procedure Act requires a regulatory impact analysis before the state can adopt any proposed rule with a potential economic impact of more than $1 million.

After the document is approved, it will then go to the MFC for approval and a notice of text can be published. Following that, the commission must hold a public comment period and, likely, a public hearing before considering final adoption of the rules.

The proposed rules then must be sent to the State Rules Review Commission for approval. If that is gained, then before the adopted rules can be implemented, fishery management plans for any impacted fisheries must be modified to reflect the new rules.

If after adoption by MFC, there are 10 objections filed, then the matter is sent to the General Assembly to decide what, if anything, should change.

The petition proposes designating all inland waters and 3 miles out into the ocean as Special Secondary Nursery Areas (SSNAs), thus prohibiting almost all shrimp trawling, and restricting days and times, including prohibiting nighttime shrimping.

North Carolina has three shrimp species found in the sounds, and each is harvested at different times beginning in the Spring and stretching into the fall.

One of the species is mostly caught at night when it is most active.

Designation of the SSNAs would carry with it a prohibition of shrimping and other trawling activities such as crabbing and clamming in the sounds and flounder in the ocean from May 15 to Aug. 15. It also would limit shrimping to three days a week and enact 45-minute tow times.

If adopted, it would require two by-catch reduction devices, but that has been in place for years, as well as turtle excluder devices. Additional work is under way to add more adaptations to further reduce by-catch.

About 45 percent of the estuary, 900,000 acres, is already closed to trawling, but the petition seeks to expand that to a 100 percent closure of 2.2 million acres of coastal waters.

Normally, SSNAs are closed based on specific criteria, which include data on fish and shrimp abundance, habitat amond other things. Currently that information doesn’t exist for the huge area being considered.

The prohibitions also would also impact crab and peeler trawling, clam kicking and live bait harvest.
The petitioner asserts that stocks of spot, croaker and weakfish (gray trout) are suffering from trawling, but there is no science to support that.

Spot is listed as a “concern,” but there is no coast-wide stock assessment, and fisheries scientists are unable to determine if it is over-fished.

Croakers are listed as “concern” but are also noted by DMF staff as not being over-fished. The N.C. Wildlife Federation wants a 10-inch size limit on this species. but it rarely grows larger than 7.5 inches. If the petition’s requested rules are adopted, the size limit for spot would be increased to 8 inches.

Weakfish stocks have has continued to decline for decades and scientists have eliminated overfishing as the reason.

The petition has drawn objections from many fisheries scientists who have noted incorrect, incomplete data and in some cases, the use of information taken out of context.

According to Marine Fisheries rules, petitions are not to be accepted by the commission for consideration for rule-making unless accompanied by an economic impact statement. To comply with the mandate, the Division of Marine Fisheries hired an economist and the cost of the work was taken from the division’s budget.