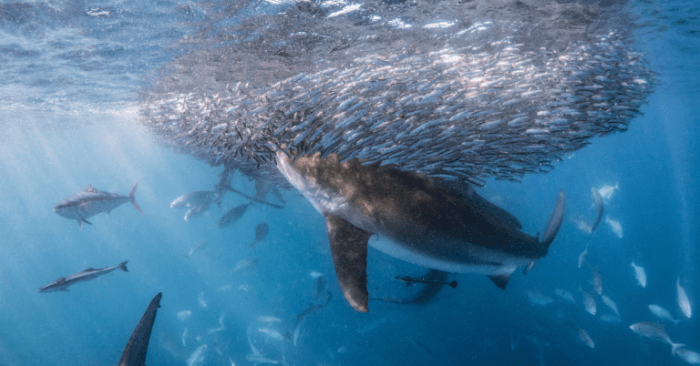 Every creature in the estuarine, nearshore, and bluewater environments plays an important role in the health and sustainability of our offshore fishery food web. Every creature from the lowly phytoplankton, to zooplankton to the pelagic giants at the top of the food chain absolutely depend on a bait sequence to survive. Even after their natural death, all species become “bait” to benthic species including bottom fish in the snapper-grouper complex, shark species, and the like. So the bottom line, everything is essential bait to another pelagic fish. At the top of the food chain perhaps the mighty blue marlin has only two known predators as bait which is believed to be the shortfin Mako and the great white.

Most of us pelagic fisherman— those hunting Billfish, Yellowfin, Blackfin and Bigeye Tuna, Wahoo, Dolphin, Mackerel and Cobia have an interest in the baitfish complex. Here are just a few facts in this complex, ever-changing food web dynamic.

The basis of the entire pelagic food chain has its roots in the microscopic production of phytoplankton. They tend to bloom in nutrient-rich waters close to shore, near and in estuaries but also in upwellings that occur along current boundaries, especially edges along the Gulfstream where back-loop eddy’s on the western wall “upwell” nutrient waters to the surface. “Zooplankton” uptake phytoplankton menhaden, and flying fish. Of course, these bait species support the king mackerel fishery, the giant bluefin concentration in late winter/early spring, and with the flying fish supporting numerous topwater pelagics throughout the year along the Gulfstream current.

There are 2 additional categories of bait fishes that play an important role for large bluewater pelagic fish. Other than the filter feeders, “toothy” fish provide an important resource. Many of these are the smaller-sized and juvenile gamefish or several species in the Tuna/Mackerel family. In fact, two species of Mackerel— the frigate and bullet—are so important to Blue Marlin, Dolphin, and Wahoo that they are recognized by the South Atlantic Fishery Management Council (SAFMC) as an eco-systems component of the Dolphin/Wahoo fishery management plan under amendment 12 to that FMP. And of course, blue marlin love “peanut” sized Dolphin and small Yellowfins.

Lastly, there are many small “schooling minnow-like “species and sardine-related species that are too many to name, but yellowfin tuna eat em like popcorn. Also, Eel and Squid make up partial diets and are common to many of our pelagic gamefish’s healthy eating habits. Swordfish love Squid.

So next time you put that 60-pound Yellowfin, Dolphin, or Wahoo on your cockpit deck, remember that this beauty all started with a little bit of sunlight and a nutrient-rich water environment.

by Robert Michelson The state Division of Marine Fisheries earlier this spring imposed new recreational bag limits and commercial season closures to protect stocks of spot and Atlantic croaker. As previously reported, effective April 15, the recreational bag limit for spot and Atlantic croaker is 50 fish per person, per day, per species, and applies to all [...] Fishing |  Full Article

By Coastal Carolina Fisherman Every creature in the estuarine, nearshore, and bluewater environments plays an important role in the health and sustainability of our offshore fishery food web. Every creature from the lowly phytoplankton, to zooplankton to the pelagic giants at the top of the food chain absolutely depend on a bait sequence to survive. [...] Fishing |  Full Article

The N.C. Division of Marine Fisheries is accepting public comment on proposed management changes to further reduce bycatch of non-target species and minimize ecosystem impacts. Draft Amendment 2 to the Shrimp Fishery Management Plan contains a suite of management options that range broadly from status quo to a complete closure of all inside waters, including [...] Fishing |  Full Article

The N.C. Division of Marine Fisheries is seeking input from the public on a draft spending plan for $4.5 million in federal fisheries relief that Congress approved in the 2021 Consolidated Appropriations Act (CARES Act II). The spending plan must be approved by NOAA Fisheries for the state to receive the funding. The draft spending [...] Fishing |  Full Article

The N.C. Marine Fisheries Commission voted on Thursday to take Draft Shrimp Fishery Management Plan Amendment 2 out for public comment and advisory committee review. The draft amendment focuses on reducing bycatch of non-target species and minimizing habitat impacts. It includes a suite of options ranging broadly from status quo to a complete closure of all inside [...] Fishing |  Full Article

The N.C. Division of Marine Fisheries’ Artificial Reef Program, in partnership with the Oregon Inlet Artificial Reef Committee, sank a 108-foot tugboat Friday off Oregon Inlet. The Valley Forge joins two other tugboats, the America, and the American at AR-165. The site, which is located about 7 miles southeast of Oregon Inlet, also contains approximately [...] Fishing |  Full Article