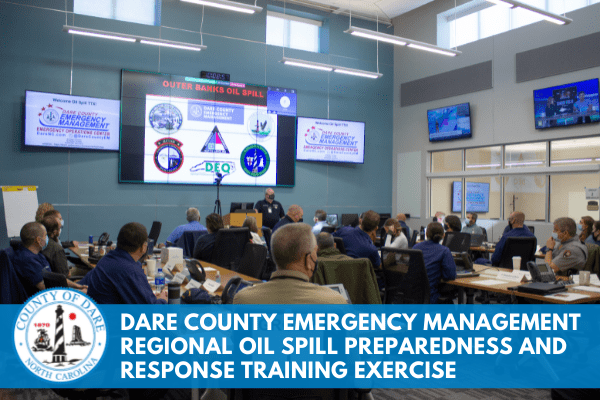 Facilitated by Crisis Tec, a private contractor that provides crisis training and consulting services, the “Outer Banks Regional Oil Spill Tabletop Exercise” was designed to engage area representatives from numerous federal, state and local agencies in group discussions about their plans and procedures for providing a multi-jurisdictional response to an oil spill with the potential to affect the coastal environment within Dare, Hyde and Currituck counties.

To drive the discussion, facilitators used a hypothetical three-phase scenario that involved a large oil tanker that was traversing the North Carolina coast during a developing tropical weather event. The first phase started as the tanker experienced an engine room fire that forced the crew to abandon the ship approximately 58 miles off the coast of the northern Outer Banks.

During the second phase, the fire had significantly damaged the structure of the ship, leading to 5,000 gallons of petroleum products being released into the Atlantic Ocean every hour as the vessel drifted toward the shore. During the third phase, the vessel was grounded in the surf zone, causing additional damage that increased the release rate to 200,000 gallons of petroleum products every hour.

To bring reality to the discussion, participants were able to review the oil spill trajectory projections that would be used during an actual spill. The modeling, which was developed using the National Oceanic and Atmospheric Administration’s oil spill trajectory model, uses information on wind and currents—along with information about the type of product spilled and the strength of the turbulence expected in the water—to predict the trajectory of the spilled oil.

Using the trajectory maps for each phase of the scenario, participants worked in small groups to discuss how existing plans would be used to mobilize a multi-organizational response to a major oil spill, as well as ways to mitigate and recover from its potentially devastating effects. While the discussion after each phase had varying outcomes, all identified the need to take aggressive actions to ensure public health and safety and to minimize the impacts on the environment while also continuing to keep the community fully informed on the various actions that would need to be taken to protect public health and safety.

In addition to discussing how existing plans would be used to overcome the physical impacts of the spill, participants also discussed the potential long-term impacts that might occur as a result, including ecological damage, impacts on tourism and the local economy, as well as financial responsibilities and insurance claims.

“With countless large vessels transiting our coast and many smaller ones coming ashore recently, the exercise was a great opportunity to renew our partnerships and understanding of how oil spill response plans and actions are integrated across all levels of government,” said Dare County Emergency Management Director Drew Pearson. “Applying the lessons that were learned during the training exercise will help improve response and mitigation efforts as participants update their plans and continue to work to enhance the regional planning and response efforts that are needed to overcome a major oil spill.”

Cape Lookout National Seashore has about $8 million to go toward repairs of the 1859 lighthouse, but that’s not nearly enough to cover a total rehabilitation. Seashore Superintendent Jeff West said recently that not only does he and the rest of the folks at the park want to repair and renovate the 163-foot lighthouse, they [...] Seashore News |  Full Article