Celebrate eleven years of the Surfalorus Film Festival, presented by North Carolina Aquariums and Jennette’s Pier, taking place during the Eastern Surf Championships, Sept. 18-21, 2022. Surfalorus brings a stacked lineup of films including Mike Leech’s portrait of local legend Jesse Hines as well as the new documentary Waterman about Hawaiian statesman Duke Kahanamoku. Special guest Ben Gravy will join us on the closing night for a screening of For the Dream.

The festival kicks off on Sunday at Outer Surf with a special screening of HINES and then the party moves over to Swells’a Brewing for a book release for North of Nowhere: The Surf Photography of Mike Nelson. Both Matt Pruett and Mike Nelson will be on hand to talk about the book and sign copies for Surfalorus guests.

To round out the lineup, Sweet Adventure screens on Tuesday, September 20 at Jennette’s Pier. This whimsical feature, wonderfully narrated by action sports legend Salema Masekela, features a handful of cameos from surf culture legends as well as slick photography, perfectly curated music and well-constructed edits. If you’ve never experienced the amazing lineups and waves of El Sal, this is a primer on how to make it happen. There will be a Q&A with the filmmakers after the screening.

But no festival is complete without a handful of rad short films to keep the creativity flowing. Shorts Block One screens on Monday night, following a special celebration of the life of ESA Co-founder Cecil Lear. The shorts block brings together films from Turkey to Brazil and from  Wrightsville Beach to Scotland with a few stops at unknown locations in between. This grab bag has everything from a caper comedy to a journey to the “Cramaverse.” Shorts Block Two has the same wild reach and screens at Jennette’s Pier on Wednesday at 4pm.

Tickets are on sale now at https://surfalorus.eventive.org for all screenings. An all-access pass can be purchased for only $25. The 11th annual Surfalorus Film Festival is presented by North Carolina Aquariums, Jennette’s Pier and is a co-presentation of the Cucalorus Film Foundation and Dare Arts with support from the Outer Banks Visitors Bureau. Contact dan@cucalorus.org for more information. Graphics and hi-res photos for featured films are available on request. 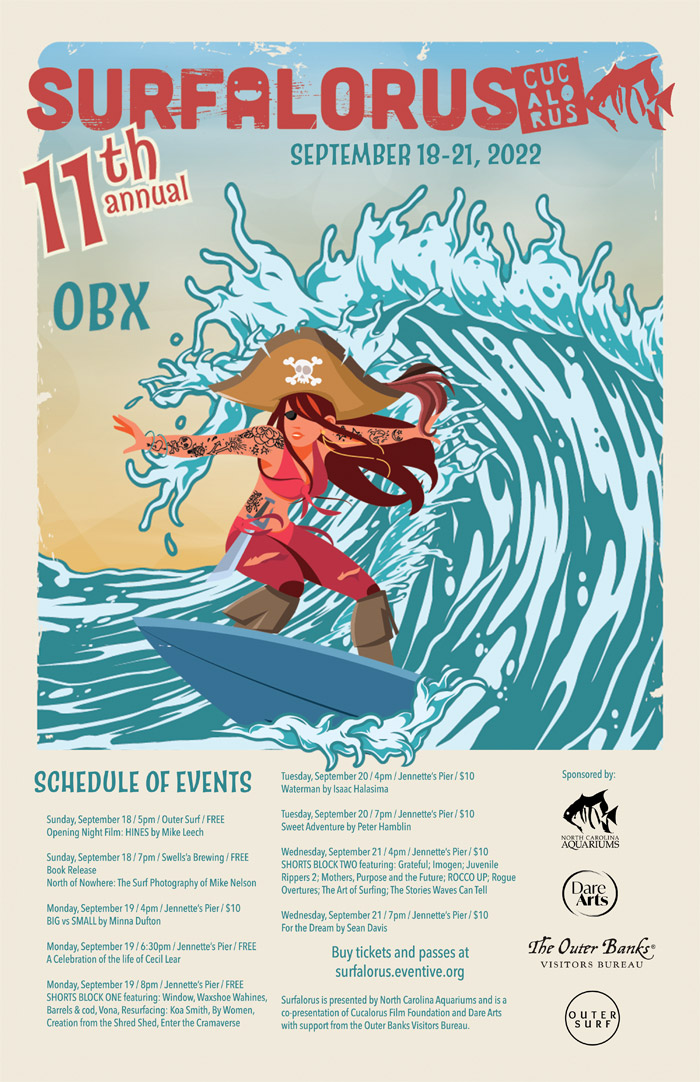