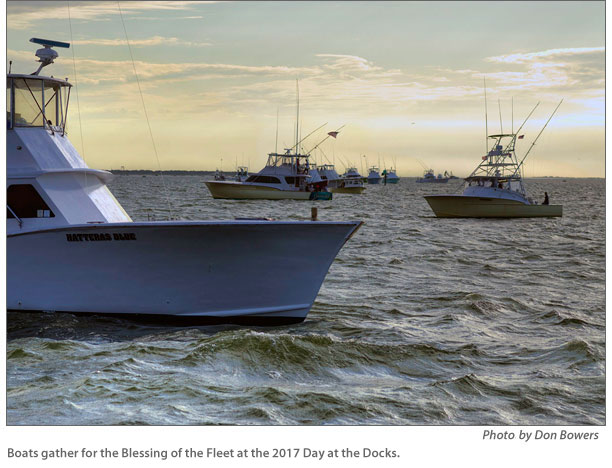 On Saturday, September 15, the docks that border the southern end of Hatteras village will spring to vibrant and bustling life. Children will be rescuing a sinking U.S. Coast Guard vessel, making a Fish Print masterpiece, or reeling in concrete marlins that weigh as much as they do. Visitors of all ages will be using their taste buds to determine the best chowder, watching a cooking competition with homegrown culinary artists, or just learning about daily life along the Hatteras waterfront. And all of these activities will be peppered with live music, demonstrations, artworks, raffles, and lots of good grub to go around.

It’s all a part of the Day at the Docks celebration, and it’s one of the most anticipated events of the year for Hatteras village.

Day at the Docks first launched as a one-day event in 2004, as an effort to recover after 2003’s devastating Hurricane Isabel. Isabel cut a new inlet south of the village, effectively separating Hatteras from the rest of the world for weeks.

The event has grown by leaps and bounds over the years, attracting visitors by the veritable boatload who return every September for the celebration. But for 2018, organizers say that the event is returning to its roots as a tribute to local life on the water.

“The main focus of Day at the Docks has always been fishing, and we’re bringing that back,” says Lynne Foster, who was the driving force behind the creation of the annual event. “That’s what everyone loves about the festival – it’s the only one of its kind in [North Carolina.]”

“We’re trying to slim the event down, and make it more about the watermen, their lives, and their existence here on Hatteras Island,” echoes five-year event organizer Jon Kelmer.

This focus on the local fishing community certainly doesn’t skimp out on activities, however. Longtime attendees can look forward to the same wave of attractions and events that Day at the Docks is known for, including the annual Chowder Contest with participating local restaurants, the kids fishing tournament, the always exciting concrete marlin competition, the U.S. Coast Guard’s “sinking stimulator,” and plenty of live music and demonstrations throughout the day, followed by the evening’s Blessing of the Fleet.

But there are some changes and new additions for this year, starting with the annual Seafood Throwdown.

In previous years, the Seafood Throwdown featured two competing chefs from local or North Carolina restaurants, who would race to create an inspired seafood dish that was then judged by a panel of experts.

This year, the folks donning the chef hats in the competition will be representatives from Hatteras Island’s own local Volunteer Fire Departments.

As always, Jeff Aiken will provide and present the mystery ingredient, and will help provide a play-by-play of the ensuing action along with Bob Barris, who has been the event’s emcee since 2008.

“We have some new people involved, too,” says Foster. “The produce is from the new Village Market Red & White, and the salt is coming from our own Hatteras Saltworks, so we’ll have more local [ingredients] involved than ever before.”

“All of our judges are commercial fishermen this year as well, and are coming from Kitty Hawk, Beaufort, and Elizabeth City. We’re involving as many fisherman as we can in this competition.”

Day at the Docks will also feature a Watermen United project which will spotlight commercial fishing on Hatteras Island and Hatteras village through the voices of the fishermen and their families themselves.

“Another new thing we added for this year is that we’re asking anyone who has ties to the water to write out a couple of paragraphs about who they are, and how they or their loved one work on the water” says Kelmer. “We will then have [these stories] displayed all day as an Island Heritage Project.”

2018’s Day at the Docks officially kicks off on Friday evening, with the annual Hurricane Awareness Town Hall, Taste of NC, and the Talk of the Villages taking place at various points around Hatteras village. As always, the main event on Saturday will be clustered along the docks, with every corner of the waterfront offering something unique for visitors to see, explore, taste and do.

“There will be live music in the main tent, the chowder cook-off, and even one or two of the boats from Wicked Tuna Outer Banks will be here, and will be at the docks for people to meet and greet,” says Kelmer. “One thing we’re also going to spotlight this year is island boat builders. We will have several boat builders on the island that will have their boats represented – That will be a new attraction for everyone to enjoy.”

“We’re bringing it back to the water, and back to Hatteras,” adds Kelmer. “It’s important for people to come down here to understand just how many ties the community has to the water.”

A complete schedule of events, as well as event sponsors and location, can be found online at http://hatterasonmymind.com/HVCA/DayAtTheDocks/ .