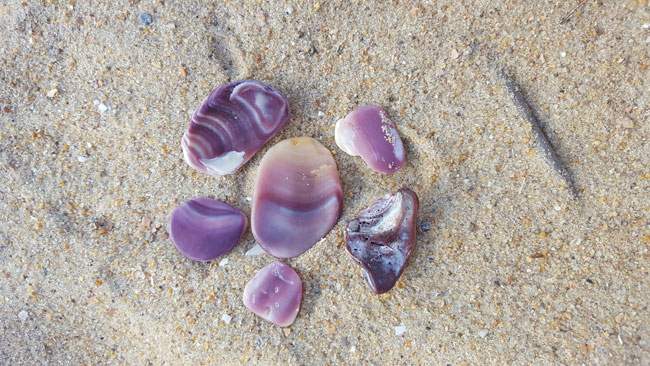 Throughout the centuries, people have collected treasures off the coastal shores that the ocean leaves behind with the ever-changing tides. Storm surge and shoaling are some of the ways these treasures have found their way from the vast depths of the sea to our sandy shorelines. The earliest Native American inhabitants of Hatteras Island also participated in beachcombing. A popular item to collect for coastal natives were colorful shell fragments which they would craft into beads called wampum.

Wampums beads are made from broken pieces of whelk and clam shells which can be found all along our beaches. The more appealing and commonly used of the two types of shells were the purple and white swirly pieces of the quahog clam.

The early Native Americans had a very high appreciation for this naturally occurring but rare color, and to celebrate its rarity, they produced thousands of small, cylindrical beads called wampum. Men and women would use the beads to make elaborate bib necklaces, wide waist belts or sashes to hold their tools. In these shell fragments, they valued the beauty of the natural purple color produced by the shell during its lifetime. So, to honor the animal, in a way – as well as the rare gift that nature provided – the native residents would make simple beads to decorate themselves and other items that they used daily.

The quahog clam shell, where the purple shell pieces comes from to make wampums, is a native species of our coastal waters. There is a species of quahog clam that lives in the Atlantic but the one that was mainly collected for wampums and eaten by Native Americans are the type found along the grassy waters of the sound.

Seashells, in general, get their coloring from their diets and produce their colors from the inside out. In our area, the quahog clam produces a gorgeous purple compared to the same species in the Northern Atlantic where they are often a deep cornflower blue.

Once the clam dies, the shell breaks apart, gets tossed around by the ocean, and the broken bits become polished and smoothed over time. The purple parts of this shell are then scattered about the coastline for a person to come scoop them up.

The barrier islands of the Outer Banks are constantly being reshaped by the wind and water which makes the soundside inhabitant clams available to find on the ocean side. The bright colors make these broken shell fragments stand out against the background of the sandy shores, thus making it easier for new beachcombers to spot. 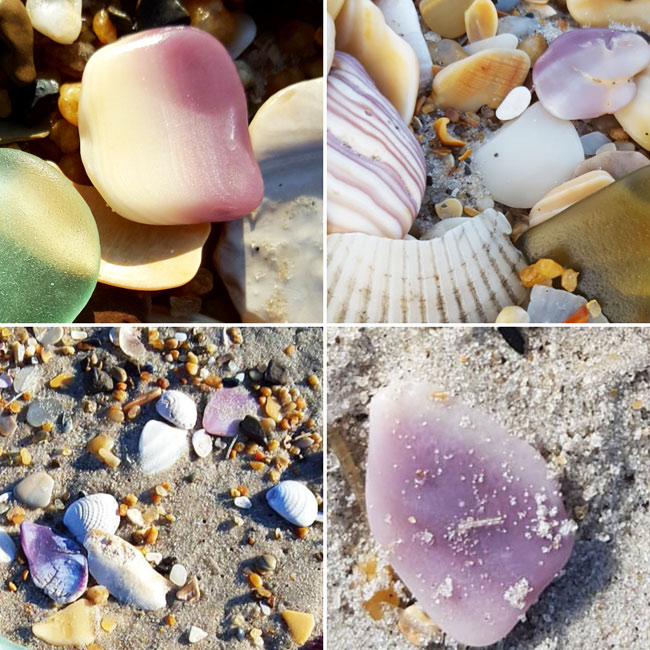 Whenever I am collecting these, I try to find pieces that have purple on both sides. Oftentimes, when you pick up a purple shell piece, the other side is not purple. The other side is often yellow, white, grey or a mix of those colors, because the purple was made on the inside of the shell and the outside is a different color, and usually a color to match the environment the clam lives in. Over hundreds and thousands of years after the shell’s death, the outer layer starts absorbing the coloring of the sand that it is buried in and can begin to turn the color of the sand. Then, as the brutal ocean tosses these pieces around, the fragments wear down, similar to the sea glass process, and it leaves a smooth mixture of these colors. So, finding an all-purple piece means that all the exterior of the clam has been removed from the ever-changing ocean.

There are many references to wampums as having a monetary value to Native Americans throughout their recorded history. For example, the early Dutch settlers became quick experts at making wampums from these shell fragments. They did this to trade to natives for furs, and it was often noted that the natives gave generous amounts of furs in exchange. For most Native Americans, however, the gifts of nature were given to everyone. To them, one could not buy furs or land or food, nor a piece of the sky for that matter, as they were all available for everyone to use. But since modern settlers had a monetary value for just about everything, and the wampum beads were used like jewelry which has a value, then the conclusion was that wampum have a value.

Today, these quahog pieces have a different sort of aesthetic value for beachcombers, simply because while they are by no means rare, no two pieces are ever identical. A larger collection of quahog bits and pieces can be found in a single beachcombing outing if there are some hefty shell piles on the sand, and they can be showcased beautifully in a vase or jar, adding a bright dose of color to any collection.

Easy to find and even easier to admire, wampum is a shell fragment that even the casual beachcomber can readily discover. So, don’t overlook this common but eye-catching find, and instead, have fun adding a pop of color to your collection of coastal treasures!