The Frisco-Buxton Pathway Committee has a longstanding goal to raise $95,000 for a new multi-use pathway by the end of 2022, and per a December 2 update, the Committee has steadily inched closer to this milestone in the past several weeks.

With the deficit becoming smaller and smaller, hopes are high that several holiday events at the Frisco Woods Campground will put the committee over the top.

The 2nd Annual Hayrides with Santa event, which will be held December 3 from 5:00 – 8:00 p.m., will feature bounce houses, live music, food, and pictures with the big man himself, and is one of many festivals held over the past year to raise awareness and donations for the new pathway.

After the Hayrides with Santa festivities, the Frisco Woods Campground will remain open to the public from December 4-15 for a Christmas Light Festival, where folks can drive or walk through the site to enjoy the expansive holiday display.

There will be plenty of lights and décor to admire, including the original boat and fishing rod Christmas tree from the Frisco Futuro (or UFO) House, which was donated by Leroy Reynolds specifically for the Light Festival. The cost is $5 per car/group, and all donations go towards the Frisco-Buxton pathway.

The pathway project is spearheaded by the Frisco-Buxton Pathway Committee and the Outer Banks National Scenic Byway Committee for Dare County, which helped create similar pathways in the island’s five other villages: Rodanthe, Waves, Salvo, Avon, and Hatteras.

The Hatteras Island community got its first look at the proposed Frisco-Buxton pathway at a 2019 open house, which provided detailed plans of a proposed 7.6-mile pathway for pedestrians and cyclists.

The Frisco-Buxton pathway project has been in the works for years, but it gained momentum in 2022, thanks to the introduction of a new potential grant from the National Scenic Byway program.

Mary Helen Goodloe-Murphy, (who was instrumental in garnering grants for the previous Hatteras Island pathway projects), told the Dare County Board of Commissioners in a spring 2022 meeting that – for the first time in nine years – the National Scenic Byway program had introduced a new grant, which is similar to the grant that funded the Rodanthe-Waves-Salvo and Avon pathways in 2010.

The National Scenic Byway grant for the Frisco-Buxton pathway would fund the bulk of the first two phases of the project, for a total cost of roughly $2.48 million. This would cover a 4.41-mile stretch of roadway from the Cape Hatters Secondary School in Buxton to Piney Ridge Road in Frisco, and if awarded, the National Scenic Byway grant program would provide 80% of the funding for the project, but would also require 20% in matching funds.

The Dare County Tourism Board is expected to provide roughly $400,000 of this remaining 20%, but that still leaves more than $83,800 to complete the project funding, (which doesn’t include extra funds for the future maintenance of the pathway.)

This deficit is where fundraising events and donation solicitations come in.

“The [$95,000] is the amount that we will need to satisfy a requirement for the grant,” said Stacey Saunders of the committee in an earlier interview. “Should we raise more than that, there are two things to keep in mind: First, this is only for phase one of the project, and second, we still have to pay to maintain these sidewalks when we’re done.”

“The pathway is important to us, because Frisco and Buxton are the only two villages that don’t have pathways, and just in the past year we have seen multiple bike accidents or near-misses,” said Saunders. “There is no safe place to ride bikes in our area.”

The National Scenic Byway Grant has not been awarded yet, and a decision and announcement are expected sometime in late 2022 or early 2023. While it’s not guaranteed that the Frisco-Buxton pathway will receive the approximate $2 million dollar grant, precedence and community support make the grant award a very real possibility.

In the meantime, the imminent Hayrides with Santa and Christmas Light Festival will hopefully help put a big dent in the $95,000 that the island needs to make the pathway come to fruition 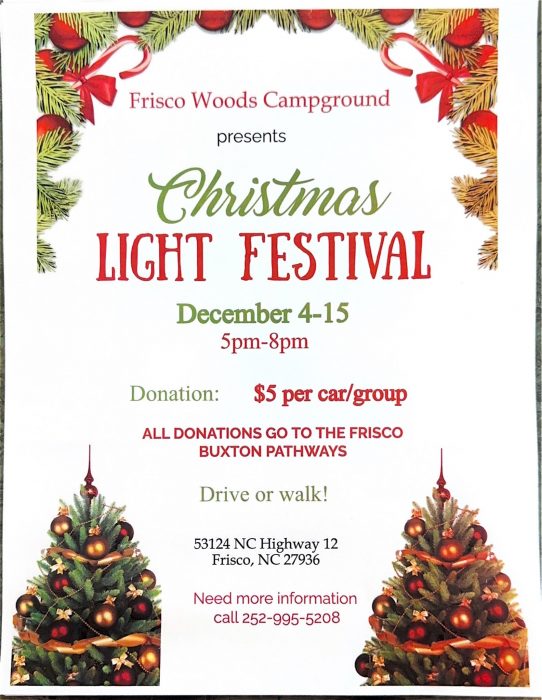 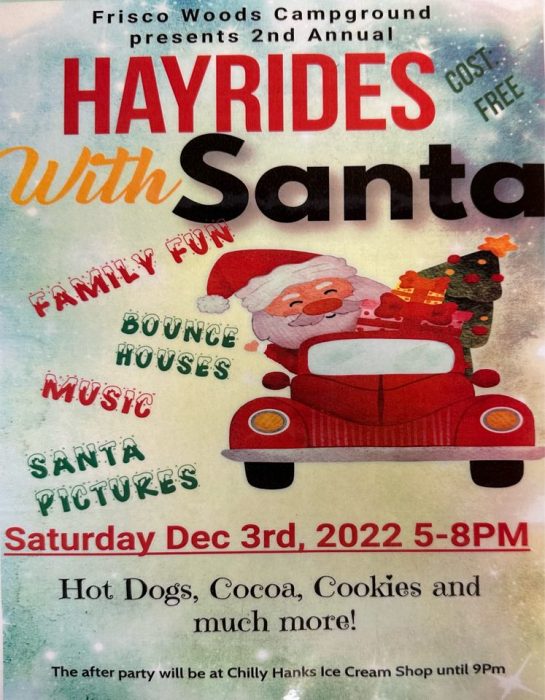