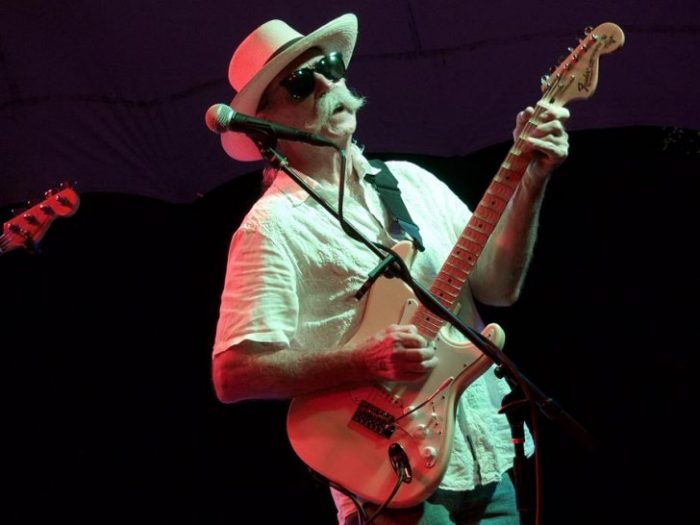 In a career in music spanning more than 50 years, Mojo Collins has seen and done a lot. He has been awarded with the North Carolina Order of the Longleaf Pine, received a 1999-2000 North Carolina Arts Council Fellowship in Music for Songwriting and written songs about Jockey’s Ridge when bulldozers were getting ready to flatten it. When the Cape Hatteras Lighthouse was in danger of falling into the sea, Mojo wrote a song.

He was in San Francisco during the 1967 Summer of Love and opened shows for everyone from the Grateful Dead to Janis Joplin, and more.

But for all of his accomplishments, no one has ever made a film about his life. Until now.

Mojoman: The Blues Journey of William “Mojo” Collins produced by documentary filmmaker Mike Raab takes viewers on a ride through a fascinating life. Featuring some remarkable archival footage, much of it provided by Collins’ wife Bonnie, Mojo’s life in music is traced from his time in the Air Force to his performances on the Outer Banks.

For his efforts, Rabb’s’ film won the Sweet Pea Award after being submitted to the Downeast Flick Fest (DEFF). Located in Kinston, NC, the DEFF holds an annual November film festival that highlights independent filmmakers of North Carolina and North Carolina stories. The 7th Annual DEFF will be held November 19-21.

One of the most prestigious awards, according to the DEFF, is “designed to highlight films that spread pride, joy, and awareness of NC’s history, culture, and collective future.”

For Raab, Mojo seemed like the ideal subject for a documentary. There are, he said, three things he looks for in a documentary. “Number one, I have to find something that really captures my imagination. Number two, can I do it justice? And number three, will somebody want to sit down and watch it?” he explained “We started going back through his past, and I was, “[Wow]. This guy really is interesting.”

For film judging panelist Celestine Davis, Mojoman seemed the perfect fit for what the Sweet Pea Award is supposed to be.

“I love that kind of music myself personally, and I was impressed at how he conveyed what North Carolina is all about,” she said. “His commitment to service, to the community, and the music itself, really touched something in me and also in the other jurors that were looking and judging the film.”

For Collins, the accolades coming to him after so many years playing music are something he never thought he would see. “Most people don’t live to see something like this happening,” he said. “I’m really humbled by this.”