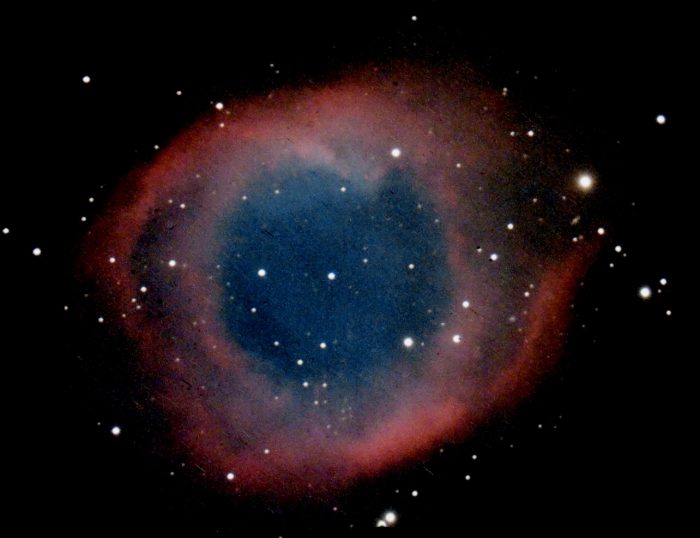 The Helix Nebula was not discovered until 1824. I suspect this was largely due to its southerly location, which makes it a rather difficult object to see. It never gets very high in North Carolina’s night sky, and many of the early astronomers, like Charles Messier, lived much further north, making this deep-space object (DSO) even lower in the night skies. Another contributing factor is the Helix Nebula is large and fairly bright, but it has a very low surface brightness, making it hard to see without the aid of a camera.

The Helix Nebula has a visual magnitude of +7.59. It’s about 790 light years away from us.

The Helix Nebula happens to be one of my favorite DSO’s. Unfortunately, this year, I have had a very hard time getting a decent image of it due to a huge increase in the amount of light pollution on the southern side of my observatory.

What to look for in October’s Night Skies.

Mercury, Venus and Spica will form an interesting triangle near the western horizon right after sundown on October 1. The triangle will elongate as the month goes by. Spica will seem to race to catch up to the setting Sun while Mercury and Venus lag behind. By October 10 or 11, you won’t be able to see Spica, at all but Mercury and Venus will continue to rule the evening skies for the rest of October.

You can see Jupiter and Saturn shortly after sunset. Simply look due south and you will see two fairly bright objects in the night sky. Jupiter, the brighter of the two, will appear in the WSW. Saturn will be almost due south. Pluto, the dwarf planet, is a little East of Saturn.  With a good pair of binoculars, you show be able to see the Galilean moons of Jupiter and the rings of Saturn. If we get some very calm and clear nights, it might be a good time to try and get photographs of the two gas giants. 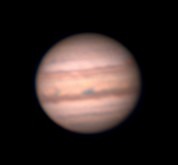 Neptune will be further east of Saturn than Pluto. With a visual magnitude of +7.8, you cannot see it with the naked eye. Uranus rises at 7:53 at 9:53 p.m. Under very good observing conditions, you might be able to see it with your naked eye. Both planets are fairly dim and best viewed through a telescope or binoculars.

Starting around October 16, you might be able to see Mars just before sunrise.

Venus and Mercury both rise after the sun and will not be visible in the morning skies during October.

The Draconids appear to emanate from the constellation Draco. One of the best things about the Draconids is they can be viewed in the evening. They will appear almost directly overhead once the skies get dark on October 8.

The Orionids will likely offer more action than the Draconids. You can expect to see about 20 shooting stars per hour. There’s also a good possibility of a fireball or two. As the name implies, the meteors appear to originate from the constellation Orion. Best viewing is at 5:00 AM. The center of activity will be about 30 degrees south of the zenith.

The Outer Banks Restaurant Association is collecting kitchen equipment for restaurants in Ocracoke that were affected by Hurricane Dorian. Many restaurants lost everything and are starting from scratch. “We all (restaurant owners) have used kitchen equipment laying around that we aren’t using.” Said Mike Kelly with Kelly’s Hospitality Group. Mr. Kelly has a storage unit [...] Community News Brief |  Full Article

The disconnect between current flooding reality and the newly released floodplain maps in Dare County, which decrease flood zones by 41%, may be starker than most coastal areas in North Carolina because of the barrier islands’ geology. But much of the disparity between actual vulnerability and the flood risk reflected in Dare’s pending flood maps [...] Local News |  Full Article

Permanent Ocracoke residents who have acquired new vehicles since Hurricane Dorian can receive priority loading passes for those vehicles at the Silver Lake Terminal ticket booth. The ticket booth is open between 8 a.m. and 4 p.m. seven days a week. To qualify for a priority loading pass, residents m​​ust fill out a priority pass application​ and [...] Local News |  Full Article

Habitat restoration activities begin this week on Pea Island National Wildlife Refuge. Partners at the North Carolina Department of Transportation (NCDOT) and contractors with Barnhill Construction will excavate sand behind the Oregon Inlet Terminal Groin in order to improve habitats for migratory birds. Sections within a 3-acre area will be dug out to create open water [...] Local News |  Full Article

Sometime during the long, slow process of getting Ocracoke somewhat back to normal after Hurricane Dorian hit on Sept. 6, someone must have created a check-off list of what needs to be accomplished. In the days following this devastating storm, for variable times, the island was without electric power, an open bank, grocery store, post [...] Local News |  Full Article

In an effort to reach and engage with Hatteras Island citizens, Dare County Board of Commissioners Chairman Robert L. “Bob” Woodard, Sr. will repeat the State of the County 2020 presentation on Monday, February 3 at Cape Hatteras Secondary School (CHSS). Chairman Woodard will deliver the State of the County presentation that originally took place [...] Community News Brief |  Full Article