The Other Orion Nebulae!

Last month I showed you the famous Orion Nebula, but the Orion Constellation contains several other spectacular nebulae including the Flame and Horsehead Nebula! 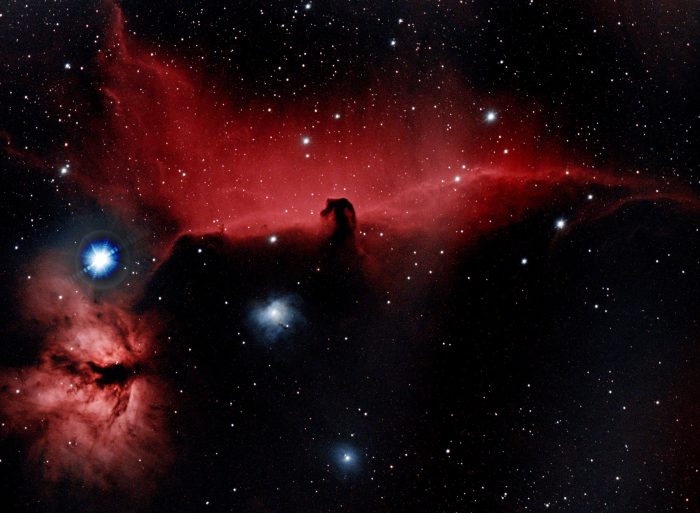 Both of these nebulae are actually composed of two distinct objects. In each case, there is an emission nebula that is partially blocked by a dark cloud of dust. The Horsehead Nebula refers to the dark nebula that obscures a portion of bright emission nebula, IC 434. On the other hand, the Flame Nebula refers to the bright emission nebula, NGC 2024, which is partially blocked by an unnamed dark cloud of dust. Both NGC 2024 and IC 434 are about 1,500 light years away from us. The Horsehead Nebula is about 1,375 light years away from us.

The Horsehead Nebula was discovered by Williamina Fleming in 1888. She discovered it while studying a photographic plate taken by William Henry Pickering.

The Flame Nebula was discovered by Wilhelm Herschel in 1786.

The bright star that appears just above the Flame Nebula is Alnitak. It is the left-most star in Orion’s belt, and has a visual magnitude of +1.7. It is only 740 light years from us.

If you happen to get up before sunrise, take the time to look at the eastern sky. Venus is the gorgeous, bright star that will immediately catch your eye! Slightly, to the right and a little lower in the sky, you might be able to spot Mars, and if you’re really lucky, you’ll see Mercury just above the horizon. You don’t have to be in a hurry to view these planets, as they’ll be visible every clear morning in February. In fact, if you wait until the end of the month, you might be able to catch a glimpse of Saturn. It will appear to be right next to Mercury, but the two are almost a billion miles apart.

In the evening skies, Jupiter will be the only visible planet. Look for it about 10° above the Western horizon.

There is a fairly bright comet, 19P/Borrelly (magnitude +7.9) located 51° above the SW horizon. In theory, we should be able to see it through a good pair of binoculars. But in reality, I’ve been having a tough time seeing it through my 11” telescope. So far, I have only been able to capture the head of the comet, and a comet without a tail is less than spectacular.

There are no major meteor showers in February, but there are quite a few minor ones. Quite a bit of activity takes place during the first 10 days of the month. Viewing is always best between midnight and 5:00 a.m. Remember, you won’t see any shooting stars if you don’t look up!