On Saturday, October 22, the public is invited to head to the grounds of the Frisco Woods Campground for a grand Fall Festival, which will feature games, food trucks, a pumpkin patch, a dunk tank, trick or treating, a silent auction, and many more activities for attendees of all ages.

And while fall-style fun will be the theme of the festival from start to finish, the event is actually the latest in a series of events hosted by the campground to raise awareness and donations for a new multi-use pathway in the villages of Frisco and Buxton.

The pathway project is spearheaded by the Frisco-Buxton Pathway Committee and the Outer Banks National Scenic Byway Committee for Dare County, which was instrumental in creating similar pathways in the island’s five other villages: Rodanthe, Waves, Salvo, Avon, and Hatteras.

The Hatteras Island community got its first look at the proposed Frisco-Buxton pathway at a 2019 open house, which provided detailed plans of a proposed 7.6-mile pathway for pedestrians and cyclists. The pathway will run parallel to N.C. Highway 12, and will eventually extend from the Valero Gas Station in Buxton to the Frisco Bathhouse Beach Access, just south of Frisco village’s borders.

The Frisco-Buxton pathway project has been in the works for years, but it gained momentum in 2022, thanks to the introduction of a new potential grant from the National Scenic Byway program.

Mary Helen Goodloe-Murphy, (who has been instrumental in garnering grants for the previous Hatteras Island pathway projects), told the Dare County Board of Commissioners in a spring 2022 meeting that – for the first time in nine years – the National Scenic Byway program had introduced a new grant, which is similar to the grant that funded the Rodanthe-Waves-Salvo and Avon pathways in 2010.

The National Scenic Byway grant for the Frisco-Buxton pathway would fund the bulk of the first two phases of the project, for a total cost of roughly $2.48 million.

These initial phases would cover a 4.41-mile stretch of roadway from the Cape Hatters Secondary School in Buxton to Piney Ridge Road in Frisco, and if awarded, the National Scenic Byway grant program would provide 80% of the funding for the project, but would also require 20% in matching funds.

The Dare County Tourism Board is expected to provide roughly $400,000 of this remaining 20%, but that still leaves more than $83,800 to complete the project funding, (which doesn’t include extra funds for the future maintenance of the pathway.)

This deficit is where fundraising events, like the upcoming Fall Festival, come in.

Frisco Woods Campground Owner Ward “Buster” Barnett and Manager Stacey Saunders are both members of the Frisco-Buxton Pathway Committee, which is working hand-in-hand with the Outer Banks National Scenic Byway Committee for Dare County on the project.

They are orchestrating the upcoming Fall Festival, (and are even volunteering as “dunkees” in the dunk tank), because the installation of a Frisco-Buxton pathway is crucial to their business, but also their community. 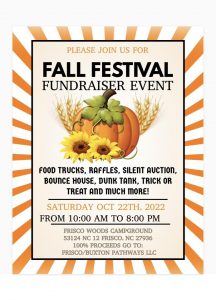 “The pathway is important to us, because Frisco and Buxton are the only two villages that don’t have pathways, and just in the past year we have seen multiple bike accidents or near-misses,” said Saunders. “There is no safe place to ride bikes in our area.”

“We have too much traffic not to do this,” added Barnett. “It’s a public safety issue, and there are a lot of people who are behind this [project]– not just the campground. We are just more vocal about the fundraising, and we have the venue to make this happen.”

With that in mind, the Frisco Woods Campground has already hosted two similar festivals in 2022, which raised more than $20,000 for the Frisco-Buxton pathway deficit.

Now, hopes are high that this expansive October festival will close the gap even further on the needed pathway funds. “My goal is to be over $50,000 as of October 31,” said Saunders. “Last year, we raised $15,000 during the last two weekends in October, so this goal is [attainable.]”

The National Scenic Byway Grant has not been awarded yet, and a decision and announcement are expected sometime in the fall of 2022. While it’s not guaranteed that the Frisco-Buxton pathway will receive the approximate $2 million dollar grant, precedence and community support make the grant award a very real possibility.

In the meantime, the imminent “Fall Fest” fundraising event – and more fundraisers to come – will help put a big dent in the $95,000 that the island needs to raise to make the pathway come to fruition

“That’s the amount that we will need to satisfy a requirement for the grant,” said Saunders. “Should we raise more than that, there are two things to keep in mind: First, this is only for phase 1 of the project, and second, we still have to pay to maintain these sidewalks when we’re done.”

If the grant is awarded, and the other financial pieces of the puzzle fall into place, construction on the Frisco-Buxton pathway could start as early as August 2023, after surveys and construction bids are conducted.

In the meantime, residents and visitors alike are invited to come out to the October 22 Fall Festival to celebrate the season while supporting a very worthy local cause.

While the event is free to attend, donation jars will be stationed throughout the outdoor venue, and attendees will be able to contribute to the pathway in a number of fun ways, like picking up a pumpkin, buying tickets for the carnival-style games, or entering the 50/50 raffle or the silent auction.

“We need to generate both funds and enthusiasm for the project, and we need our community to get behind this,” said Barnett. “This pathway is our effort, our goal, and our cause, and we’re doing anything we can to raise money for these sidewalks.”