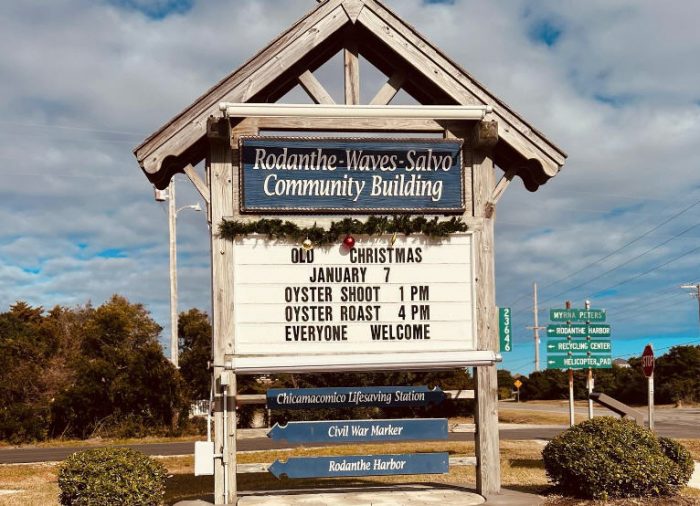 Rodanthe will once again be the home base for a local tradition that’s older than the village itself with the upcoming celebration of Old Christmas on Saturday, January 7.

Held at the Rodanthe-Waves-Salvo Community Building, this full-day affair is a celebration of the island’s deep holiday roots with plenty of fun and entertainment to go around.

Old Christmas technically began centuries ago when word finally spread to the small and lightly inhabited Hatteras Island that England had adopted the Gregorian calendar in the mid-18th century, (effectively changing Christmas to December 25), and the colonies across the Atlantic were to follow suit.

But stubborn and independent, the island community chose to ignore the change, and simply celebrated the holiday as they always did, 11 days after the “new” Christmas date, in early January.

As the tradition lingered over the decades and centuries that followed, the date of Old Christmas would change again, and this time to the first Saturday after the Epiphany, which in 2023, happens to be January 7.

For more than 250 years, the celebration of Old Christmas has held firm in the small town of Rodanthe, and as the decades progressed, a number of annual traditions began to take shape.

Old Christmas became a time when annual grudges and resentments were resolved, when islanders would feast on chicken and pastry, and when music and oyster roasts would become the agenda for the day. Perhaps one of the more unusual traditions to stem from Rodanthe’s Old Christmas was the arrival of Old Buck – a normally hostile bull who wandered into the party to socialize with villagers, and who even allowed good children to ride on his back. (Children who misbehaved during the prior year would subsequently be “bucked off” of Old Buck in protest.)

Music has always been an integral part of Old Christmas as well, and a procession of local musicians would traditionally travel from house to house singing to their neighbors. The musicians were supposedly lead by the same drum handed down through the generations, and although this particular observance has changed to an annual concert or live band performance, the drum still remains a symbol of the holiday.

This year’s Old Christmas follows the traditions of the past, and begins with an oyster shoot where marksmen take aim at oyster targets in a heated competition. The festivities continue at 4:00 p.m. with live music and an oyster feast.

Everyone is welcome to attend the full afternoon and evening event at the Rodanthe-Waves-Salvo Community Building, which begins a 1:00  p.m., and which continues until the music and dancing is done.