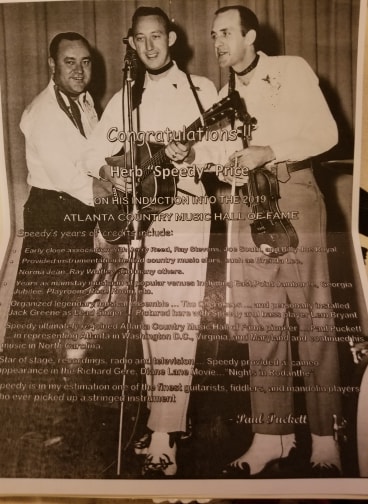 Radio Hatteras, (WHDX 99.9 FM in Waves and 101.5 FM in Buxton), will honor a local legend this Friday at noon with a tribute to country musician Herb “Speedy” Price, who is being inducted into the Atlanta Music Hall of Fame on November 30.

Speedy Price was a fixture on the Outer Banks music scene for roughly 15 years, and played at multiple locales throughout Hatteras and Ocracoke islands, but he also had deep connections with a number of world-renowned stars in the music industry.

Price had an early and close association with Jerry Reed, Ray Stevens, Joe South, and Bill Joe Royal, and he provided instrumentation backup for a number of country music stars including Brenda Lee, Norma Jean, Ray Whitley, and many more.

Price was the driving force and organizer of the famed band The Cherokees, and personally selected Jack Greene as the Lead Singer. Per Bill Smith of Radio Hatteras, when Price was with the Cherokees, they played with one of the biggest country music stars of all time, Patsy Cline.

“He loved his musical days on Hatteras Island with the Diamond Shoals Band, the Frisco Jubilee and working and recording with Clifford Swain, Bob Boyer, April Trueblood and Martin Garrish, and others,” stated Smith.

Price also spent years as a mainstay musician at a number of popular venues in Georgia, including the East Point Jamboree, the Georgia Jubilee, the Playroom, and the Rose Room.

Star of stage, recordings, radio and television, Price even had a cameo close to home in the Richard Gere and Diane Lane move Nights in Rodanthe. A renowned guitarist, fiddler and mandolin player, Price’s induction honors a lengthy career that spanned the globe, but which had beloved local roots.

To hear more about Speedy Price and his music, tune into WHDX 99.9 FM in Waves and 101.5 FM in Buxton at noon on Friday, November 30, for a musical tribute.

A day after a story published about the overflowing trash bins at the Ocracoke Convenience Site, David’s Trash, with whom Hyde County has the trash hauling contract, arrived and switched out five bins. Dave Johnson, head site attendant, made the announcement Wednesday night at the Ocracoke Civic & Business Association civic affairs meeting in the Community Center. [...] Local News |  Full Article

“Good morning Dare County,” declared Dare County Board of Commissioners Chair Bob Woodard as he opened his State of the County 2020 presentation before a jam-packed breakfast-time crowd at Captain George’s Restaurant on Jan. 15. “Dare County, one hundred-fifty years old.” Woodard continued before turning his attention to the audience and quipping: “You don’t look [...] Local News |  Full Article

Many visitors to the island are curious to know what life on Hatteras Island is like during the winter season. Residents know how erratic the weather can be and how desolate the beaches and roads are. Despite this, many business choose to stay open to serve locals and visitors alike.

It takes about a half-hour by boat from Ocracoke’s Silver Lake harbor to the loading dock at Portsmouth village. A group of birders took the ride in the early morning of the last day of 2019 to participate in that island’s annual Christmas Bird Count. This census started in 1988 and attracts between 15 to [...] Island Features |  Full Article

Another fundraiser success for Ocracoke School