April 14, 2022, marks the day that the world’s largest manmade, moving object began its titanic futile struggle to survive 110 years ago, only days after its birth.

More newspaper accounts, magazine articles, books, radio and TV talk shows, documentaries, and motion pictures have been made about the Royal Mail Ship (RMS) Titanic sinking than any other maritime disaster in our history. In spite of that massive amount of coverage, there remains a dark, little-known connection to Hatteras, hundreds of miles away. The physical evidence remains there today.

The complete story is the subject of Chapter 18 in my book, Shipwrecks of the Outer Banks: Dramatic Rescues and Fantastic Wrecks in the Graveyard of the Atlantic, which is available through Globe Pequot Press (imprint of Rowman & Littlefield), as well as through international booksellers, like Amazon, and local independent bookstores.

By now, it is clear that the answer to the sinking of this “unsinkable” leviathan is not the simplistic one-word answer of “iceberg.” No, it was a complex cauldron of more than fire and ice; it also involved a perfect storm of fatally flawed human misjudgments.

In 1870, the United States Weather Bureau, (now the National Weather Service), was established solely as a strategic information source for the U.S. military, and was thus placed under the Secretary of War Department, now the Defense Department. Several weather stations were built in key locations, and one of the first was in an area widely infamous for stormy weather: Cape Hatteras, North Carolina.

Working late into the night of Sunday, April 14, 1912, station operators Richard Dailey and Horace Gaskins received an urgent telegram message at 11:25 p.m. This time, 11:25 p.m. Hatteras time, is an extremely important clue to this mystery.

The message contained the words “CQD: Have Struck Iceberg.” It was from the RMS Titanic. Dailey and Gaskins immediately forwarded the message to their headquarters, the New York Station. It was received by 21-year-old David Sarnoff, (the future president of the Radio Corporation of America.) Like everyone else at the time, Sarnoff “knew” that the Titanic was unsinkable, so he severely chastised the senders, thinking it was a hoax. In his response, he said that the senders were troublemakers who were just “clogging up the lines,” and that they were to refrain from any further communications.

Here we encounter one of the most popular misconceptions of all time. Though many people now believe that “CDQ” stands for “Come Quickly, Distress,” it was actually a message of “Security, Distress”

French was the International Language of the time. The term “CQ” was originally the English-speaking telegraph operators shorthand of the French word, “seću,” pronounced “see-cue” meaning “security.” This was to precede a secure, important safety message; it was an alert, “stations, listen up!” The “D” was added by Marconi stations in 1904 to indicate “Distress.” As always, when things don’t make sense, we make up stories to help them make sense.  Unfortunately, CQD never meant “Come Quickly, Distress.”

Tragically, the error is compounded. There was a second chance. The steamship RMS Carpathia was the nearest ship to Titanic’s reported position, being only 67 miles away. They had received second distress messages from the Titanic. In Hatteras Village, weather bureau operators Dailey and Gaskins also received this telegraph traffic. Due to their previous reprimand, they did not forward this second message to the New York office.

The Hatteras receipt of this telegram message was probably the earliest of anywhere, because of the time that we typically hear that the Titanic hit the iceberg, which was at 11:40 p.m.

Notice in the famous James Cameron blockbuster movie that the clock does focus on 11:40. The Hatteras Weather Bureau reports receiving the message at 11:25 p.m., and Titanic’s first distress message was recorded as 12:15 a.m., her time, which was an hour earlier due to time zones. A corrected message from the Titanic was sent at 12:25 a.m., and that would be 11:25 p.m., Hatteras time, an exact match.

Had that distress call been acted upon at 12:25 a.m. Titanic time, there would have been another two hours and 40 minutes before she sank, which may have been plenty of time to rescue the over 1,500 souls who perished. It took almost exactly two hours for the world’s greatest ship, on her maiden voyage, to sink at 2:20 a.m. (her time) the next day, Sunday, April 15.

The telegram incident lay in fallow for almost 100 years. The 1901 Hatteras Weather Station was decommissioned in 1946 and finally vacated in 1995. Fortunately, restoration work was started in 2001 and finished in 2005. In the course of the restoration in 2005, workers were removing old newspapers and crumpled documents from the walls which had been used as insulation.

One piece of that paper was an old, crumpled fade station log about receiving a telegram, dated April 14, 1912.

The actual evidence – the original 1912 telegram station log received at the Hatteras Weather Bureau – still exists and is on public display in the Graveyard of the Atlantic Museum. 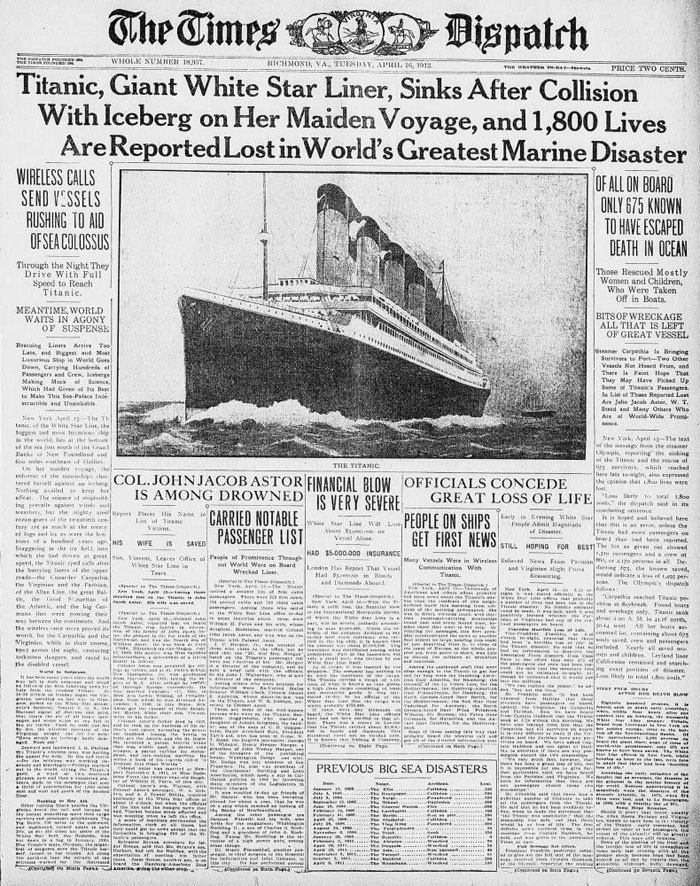