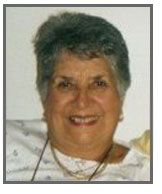 BUXTON– Carol “Nena” Malina, passed away peacefully on Jan. 4, 2014 at herhome, surrounded by her beloved family, pets, and books at the age of86.

She was born in Guatemala City, Guatemala, on April 1,1927, to Dr. Carlos Padilla and his wife, Esther Vidaurre. She lived inChiavari, Italy, from 1932 to 1942, where her father served as a memberof the Guatemalan Diplomatic Corps. Following the outbreak of the war,Carol and her family immigrated to New York City. She finished herschooling in San Francisco and upon returning to New York, met CharlesRobert Malina and was married in 1948. They settled down in Washington,D.C., where they had five children. Carol worked for many years atEquitable Life Assurance, W.A.E.P.A., Bloomingdale’s, and was an activemember of Saint Ann’s Catholic Parish. She retired to Cape Hatteras inthe early ‘90s, which was her lifelong dream. There she continued herlife of faith at Our Lady of the Seas Catholic Parish.

She issurvived by her five children: Charles Malina, John Malina, KarenScroggin, Cathy Tankersley, and Debra Malina; her 12 grandchildren:Kimberly, Ashley, Jenna, Erik, Mandie, Tiffany, Emily, Teddi, Cody,Tony, Kristina, and Kara; and six great-grandchildren; her brothersRoberto and George, her sister Maria, and dozens of nieces and nephews.She is predeceased by Charles R. Malina and her brothers Carlos andOscar.

Devoted to her family, her community, and her faith,Carol touched many lives and was greatly loved. Her legacy will live onwith the people who knew her, and her spirit will continue to inspirethem forever.

A memorial mass will be held at Our Lady of theSeas Catholic Parish in Buxton on Jan. 8, 2014 at 3 p.m. In lieu offlowers, the family asks that donations be made to Feline Hope ofHatteras Island and to the Humane Society of America. Condolences maybe expressed to the family at www.twifordfh.com.