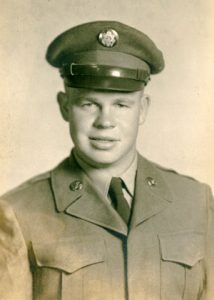 A native of Gates County, he was born March 1, 1929, to the late Retha Bunch Parks and Matthew Parks.

A United States Army Veteran, Ray served his country honorably during the Korean War. He later retired as a contractor with Virginia Electric and Power Company.

An avid outdoorsman, he loved fishing and hunting. Ray was a great mentor to his son and two grandboys and loved being involved in every aspect of their lives. Whether it be picking up from school; sports, hunting, or fishing; if he was watching his grandboys, he was a happy man. Most knew him as Ray, but to his grandboys he was PePaw.

Second to his love for his wife, Jean, family, and friends, was his love for his country. He was always proud and supportive of his country and the military. To all of us that knew him, he was a true friend and gentleman. He truly made this world a better place.

In addition to his parents, he was preceded in death by two brothers, Eddie and Dearl Parks.

A funeral with military honors will be held at 2:00 pm on Thursday, November 7, 2019, at Mt. Carmel United Methodist Church officiated by Rev. Charles Daly and Rev. Wayne Gardner. Burial will follow in the church cemetery. The family will receive friends and relatives one hour prior to the service.