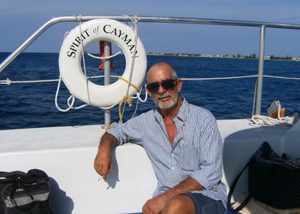 NAGS HEAD — On September 9, 2022, Ernest (Rick) F. Kerber, Jr., 76, of Nags Head, NC, passed away comfortably at his home with a full moon glowing over the Roanoke Sound.

Rick was a native of South Plainfield, NJ. In 1971, he and his wife moved to Edenton, NC; and then in 1984, moved to Nags Head due to their dream for a daily life and future retirement by the ocean. He secured work at Davis Boat Works and the Town of Nags Head, but mostly enjoyed his love of cooking at various restaurants on the Outer Banks. His being could best be described as a man who put his love of his family first, but also acted to promote someone else’s welfare, even at a cost or risk to himself.

The family would like to thank the local medical community and Albemarle Home Care & Hospice for their compassionate care.

According to his wishes, there will be no services and internment will be private.