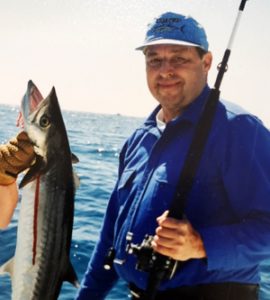 Born in Jamaica, NY, he was the son of the late Francis and Helen Roepcke. He coached Connetquot High School’s JV Hockey Team for many years. He was a volunteer firefighter with West Sayville Fire Department and was a member of the West Sayville Flying Dutchmen Drill Team. He retired after 33 years as an Electrical Engineer with the FAA and moved to Kill Devil Hills, NC in 1995. He was a licensed Coast Guard Captain and enjoyed running charters, fishing, and spending time on the water with his family.

He was preceded in death by his son, Craig Francis Roepcke.

A private celebration of life will be held in September.

In lieu of flowers, memorial donations may be made to the Colington Volunteer Fire Department’s Cadet Program (https://colingtonfd.com/).