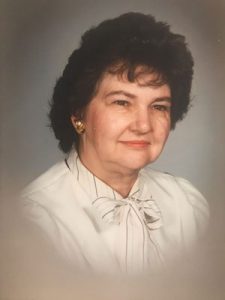 Marie was preceded in death by her parents; her daughters, Debra Jean Helms and Susan Helms Aldana; her sons, Kevin D. Helms, Sr. and Marvin Helms; and her brother Jerry L. Dowdy.

Marie was a member of Roseboro United Methodist Church from childhood through adulthood, until she became a member of Harmony Baptist Church in Clinton, NC. She worshipped the Lord with all her heart and began everyday with prayer and meditation, by listening to scripture and faithfully reading her bible.

Marie attended Mars Hills College, Highsmith’s Hospital Nursing School, and Worth’s Business College.  She was also an in-home care giver for many years.  She enjoyed spending time with her children and grandchildren as well as helping her friends and neighbors.  She will be greatly missed. May God bless those who knew her and loved her.

Plans for Marie’s memorial service will be announced at a later time. Please express condolences to the family via the online register at www.gallopfuneralservices.com.  Gallop Funeral Services, Inc. was entrusted with arrangements.