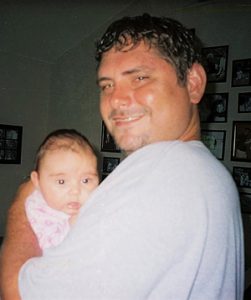 Born on November 7, 1971, he was the son of the late John Clifton Duke, Jr. and Elizabeth Rountree Duke.  John was also preceded in death by his sister, Carolyn Duke and brother Johnny Rutherford.

John grew up in Portsmouth, VA. He was loved by his peers and shined in baseball, basketball, and football.  He also was active in the Methodist Youth Fellowship at Centenary United Methodist Church.  Upon graduation from Churchland High School, he attended both East Carolina University and ECPI University.

John will be remembered by all for his kind heart and devotion to his mother, Elizabeth “Boo” Duke and lifelong friendship with his best friend Jeff Jones.  The family will tell you his biggest joy in life was spending time with his beautiful daughter, Lucy.

Because John was such a loving and giving man, his family was defined not only by blood, but also in his generous heart. He will be remembered as family to Dean and Zachary Gilmore, of Portsmouth, VA, Randy and Heidi Chappell, of Newport News, VA, Andrew and Wendy Booden, of Chesapeake, VA, and Jeff Curry of Kitty Hawk, NC.