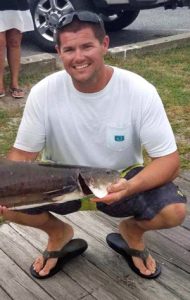 KILL DEVIL HILLS — Jonathon Allen Midgett, 38, of Kill Devil Hills NC went to be with his Lord and Savior on Wednesday, July 22, 2020. He was born at the Edenton, NC hospital on May 26, 1982: a true native to our local community.

From a young age, Jon found a love for all things outdoors which continued strongly through his life. Jon was most at peace on the bridge of his boats as the sun rose quietly and he would head out to the Gulf. He also possessed a deep passion for hunting and preserving as much of his long line of local heritage. He took deep pride in learning from those before him and sharing to anyone new. Jon was a hard worker, meticulous to detail and took great pride in all he did. He was a loving father, husband, son, and friend – always willing to lend a helping hand.

A celebration of Jonathon’s life will be held in August at Liberty Christian Fellowship. Details will be announced at a later date.

In lieu of flowers, the family asks that Jonathon’s life be honored by donations that can be made to Outer Banks Dare Challenge, PO Box 123, Wanchese, NC 27981, online at outerbanksdarechallenge.org.