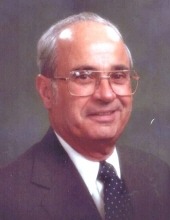 Ralph Peter “Pete” Mani, of Norfolk, VA, known as Pete by his coworkers at the Norfolk Naval Shipyard passed away on July 23, 2019.

Pete was born in Jersey City, New Jersey. From the age of ten he lived in Norfolk, Virginia, where he attended Norfolk public schools. In 1937 Ralph graduated from Maury High School where he served as business manager of The Maury Commodore. In 1941 he graduated from Virginia Tech (VPI) with a bachelor of science in mechanical engineering. Mr. Mani was a member of The Engineers Club of Hampton Roads from 1943 to the present and was president of the organization in 1969.

During his 35 year career in the Ship Design Division of Norfolk Naval Shipyard he received several Navy Superior Civilian Service Awards. He retired from the Shipyard in 1976. After his retirement from the Shipyard he and his wife spent many happy days with their friends in Frisco, North Carolina.

His family would like to thank the members of St. Pius X Catholic Church for their friendship and prayers over the years.

The family will receive friends at Hollomon-Brown Funeral Home, Tidewater Drive Chapel on Friday, July 26, 2019, from 5 to 7 p.m. with a Wake service at 5:30 p.m. The Funeral Mass will be celebrated at St. Pius X Catholic Church on Saturday, July 27, 2019, at 10 a.m. Interment will follow at Forest Lawn Cemetery. Condolences may be offered to the family at www.hollomon-brown.com.