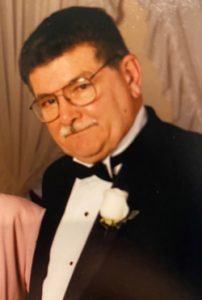 He was born in New York and resided in Woodbridge for most of his life before moving to Buxton, NC 15 years ago.  He was a graduate of Woodbridge High School Class of 1959, served in the United States Army and was also a Communicant of the St. James Roman Catholic Church of Woodbridge.

Richard was very fond of the Outer Banks beaches. As part of his retirement routine he would enjoy a drive on the beach and check out the surf and the catch of the day.  Richard lived by the motto “work hard, play hard.”  He lived life fully, surrounded by family and friends. The richness of his humor and magnitude of his story telling will leave behind unforgettable memories.  We truly believe he will continue to be the life of the party as he watches over us all.

Richard owned and operated The Woodbridge Flower Shoppe & Greenhouses for many years, during which time he was a member of the Allied Florists Association of  Middlesex County, NJ State Florist Association, FTD, AFS, and Teleflora.

He was a member of Middlesex Council 859, Knights of Columbus, Woodbridge BPOE Elks Lodge 2116, Woodbridge Veterans of Foreign Wars, was a life member of Woodbridge Volunteer Fire Company No.1 serving 36 years, Woodbridge Exempt Fire Association and the Anglers Club of Buxton, N.C.

Richard was predeceased by his parents, John and Mary Clark Schwarz; son, Richard R. Schwarz, in 2001; and brother, John J. Schwarz; in 2010.

Surviving are his wife of 51 years, Barbara Dzergoski Schwarz; daughters Anne Luyber and her husband Todd and children Hunter and Paige of West Creek, N.J.; Mary Roche and her husband Joe and children David, Sean, and Emma of Sewaren, N.J.; sister Marianne Spisak of Nebraska.  Richard also leaves behind many beloved cousins, nieces, nephews, and friends.

A memorial service will be announced at a later date. Donations in memory of Richard can be made to the American Diabetes Association.