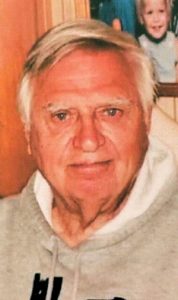 Born in Detroit, MI on March 5, 1924, he was the son of the late Philip and Sophia Skattie. In addition to his parents, he was preceded in death by a brother, Harry; and a sister, Lorraine.

Left to cherish his memory is his loving daughter, Sharon Skattie; and three grandchildren, Tiffany, Avery, and Kyle. He was also blessed with six great-grandchildren, Josh, Chase, Trey, Brennyn, Ayzlin, and Layla; great friends, Dave and Sande; as well as his nieces and nephews.

Richard was a proud United States Air Force veteran having received several medals for his service to his country. He was a member of the VFW and American Legion.

In 1951, he married Mary Droney and they lived in Washington, DC, and Maryland where he worked in the coin machine business after serving our country. He later moved solo to the Outer Banks where he became a licensed broker and contractor and worked at a variety of businesses.

A talented artist who painted, sculpted, and made small furniture, he could find a way to fix anything. He was proud to be Polish, had a great sense of humor, and was interested in politics supporting the republican party.  He enjoyed playing golf and watching sports on TV.

Richard will be best remembered for his love of dogs, always taking in strays and adopting the oldest dogs at the SPCA. The family would appreciate anyone wanting to donate time or supplies to their favorite animal cause in his memory.

In keeping with Richard’s wishes, there will be no service at this time. The family will spread his ashes over the ocean at a later date.

He will be greatly missed by all who knew him.

HATTERAS — Clifton Elwood Austin, Sr., 85, passed away at home in Hatteras Village, NC on August 7, 2020. The son of Clifton Jones Austin and Virginia Austin Johnson, Clicky was born in Ashbury Park, NJ where his father served in the Coast Guard. Clicky graduated from Ocracoke School where he met the love of [...] Obituaries |  Full Article