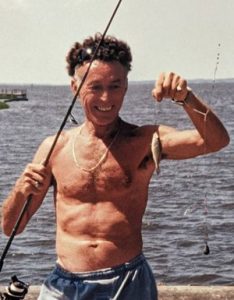 It is with great sadness that we announce the passing of Rodney Leon Bell of Kill Devil Hills, North Carolina. He died at the age of 73 on August 20, 2022. Rodney passed away with his youngest daughter at his side and left behind a legacy of charm, dependability, humor and love.

Rodney was born in Rose Hill, NC and later moved to Graham, NC with his parents L.E. and Doris Lynch Bell; two sisters, Cheryl and Darlene; and an older brother, Edward Leroy (Jr). For many years he worked alongside his family in the drywall business and at the age of 19 he enlisted in the United States Army where he served for two years. While serving in Vietnam as a door gunner and helicopter mechanic in the 1st Cavalry 2nd Armored Division, Rodney earned the Vietnam Service Medal with 2 Bronze Service Stars and received a Purple Heart. After an Honorable Discharge he returned home to Alamance County and married Lou Ann Phillips. Together they had two daughters, Chastity Ann and Sabrina Lynn.

Rodney had always had a love for the beach. It was that Outer Banks appeal that drew him to the island where he settled with his then wife and two little girls in the fall of 1980. Everyone who knew Rodney came to immediately love the funny, genuine, selfless man who would do anything for a neighbor, anything for his family and always loved to have a good time. His unconditional love for his daughters, grandchildren, family and friends was always apparent when speaking with him. Anyone who visited Rodney’s home in Colington would quickly see the numerous photographs and keepsakes from his children, grandchildren, and lifelong friends. He always considered himself a lucky man. Unbeknownst to him, his family and friends considered themselves the lucky ones.

Through life’s challenges and seasons of change Rodney always remained a constant for his girls and his grandchildren. He attended the births of all his grandchildren, numerous sporting events, countless birthday parties, graduations, weddings, funerals and other important life events. Each year, Rodney would drive to his youngest daughter’s home on Christmas morning and watch his grandchildren open gifts in the early hours of dawn. He never missed a Christmas morning at their home. He loved being a Granddaddy and was quick to teach his grandkids the patience in fishing, the fun in catching crabs, and when it was time to go home he never said “good-bye” but always said “I love you.”

Rodney knew how to throw a party and cooking a pig in his backyard was one of his specialties. In fact, it was that exact request, from both of his daughters, that after walking them down the aisle he would “cook a pig” and then throw a party for the ones they loved. Without hesitation, Rodney complied as he would do anything to have a good time and he would do everything for his daughters.

A Celebration of Life with Military honors will be held Saturday, August 27, 2022 at noon at the

Colington Park Pavilion. All who knew and loved Rodney are invited to attend and participate in one last party for this great man. Our hearts and the tiny island of Colington will never be the same without him!

Expressions of sympathy and comfort may be shared via the on-line register at www.gallopfuneralservices.com. Gallop Funeral Services, Inc. was entrusted with arrangements.