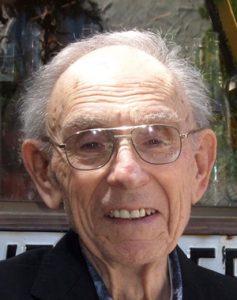 Rudy started his career as a butcher in the Contratti Brothers Meat Market business, located in Astoria, New York. After he earned his BS degree, he became a part-time high school substitute teacher in Suffolk County, NY. Rudy went on to become a Defense Contract Manager for the Federal Government located in Crystal City, VA. Throughout his career, he earned many achievements and awards.

A devoted husband and father, Rudy was also committed to his community volunteering his time to support various organizations such as Meals on Wheels and the Senior Center. He was an active parishioner of Holy Redeemer By-the-Sea Catholic Church where he served as a Eucharist Minister.

He was preceded in death by his parents, Lucia and Rudolph Contratti; his wife, Edna Rae Contratti; daughter, Jean Contratti; and his siblings, Mary Potenberg and Robert Contratti.

A Mass of the Resurrection will be celebrated at 10:00 am on Friday, May 21, 2021, at Holy Redeemer By-the-Sea Catholic Church by Rev. Dr. William F. Walsh, osfs. A graveside committal service will follow at Southern Shores Cemetery.