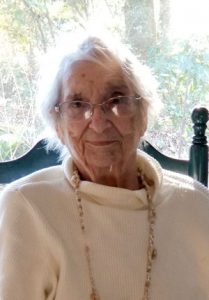 SOUTHERN SHORES — Sally Collier Hardie, 92, passed away in Nags Head after a brief illness, January 8, 2022. She and her late husband, John were popular, 30-year residents of Southern Shores.

Born May 7, 1929, in the Terre Haute, Indiana area, Sally was raised in Niles, Ohio. She graduated from Bowling Green State University with a degree in Medical Technology. Before launching her career, she met and married John Hardie and the two settled into family life in Columbus, Ohio.

Many years later, Sally and John chose the Outer Banks as their retirement home.  In Southern Shores, they thrived.  Sally was active in Duck Woods County Club, her garden club, and in a local bridge club.  She also spent many wonderful hours enjoying the beach.

Besides John, Sally was preceded in death by two daughters, Christie Hardie and Alyson Hardie, and by her one brother. Phillip Collier. She leaves to mourn her passing, her devoted daughter Suzanne Hammond (Mitch) of Seneca, SC; two grandchildren, Rachel Magalotti of Hackensack, NJ, and Jake Hammond (Michelle) also of Seneca, SC.

Friends are welcome to view and support the family at Gallop Funeral Services Nags Head Chapel Wednesday, January 12, 2022, from 5 pm to 7 pm. As she planned, Sally will be returned to Ohio and laid to rest beside John at Union Cemetery in Columbus. Details will be available at www.schoedinger.com.

In lieu of food and flowers, the family would be grateful if memorial donations in Sally’s memory were made to Shriner’s Children’s Hospital at www.lovetotherescue.org and/or to the Dare County SPCA in Manteo, NC.

Expressions of sympathy and comfort are welcome via the online register at www.gallopfuneralservices.com.  Gallop Funeral Services, Inc. was entrusted with arrangements.