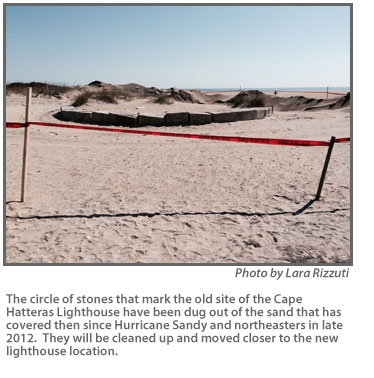 Whether climbing the stairs of the lighthouse, perusing the exhibits at the Graveyard of the Atlantic Museum, or merely meandering along a bustling soundside dock, it is easy to see that Hatteras Island abounds with a rich history and a community that deeply cherishes its culture and traditions.

When it seems that a piece of the past may be slipping through the cracks and eventually be forgotten, local residents are quick to take action, initiating petitions for their cause and launching efforts in pursuit of proper historical preservation.

The circle of stones, which marks the former site of the Cape Hatteras Lighthouse, is one such case.

The 36 massive granite stones were cut from the lighthouse’s foundation during its 1999 relocation and later engraved – through a donation from the Outer Banks Lighthouse Society — with the names of the 83 keepers of the light.

The stones serve as a symbol of cultural and historical significance — a monument to the 1870 lighthouse, the massive 1999 relocation project, and to all those linked to the light over the years.

The circle of stones attracts a steady stream of visitors who create new memories at the site while eyeballing the 2,900 feet that now stand between the lighthouse and its former home.

Additionally, it has been the site of weddings, memorial services, christenings, Easter sunrise services, and other important ceremonies

However the beach erosion that prompted the lighthouse relocation now threatens the monument’s survival.

The tide has crept closer and sand from storm tides often cover the stones completely.

Over the years, the National Park Service maintained the site by removing the sand coverage, but last spring, decided to end their cyclical battle against the elements, allowing the site to become a gauge of the rising sea level.

This decision raised a red flag throughout the island community, including members of both the Outer Banks Lighthouse Society and the Hatteras Island Genealogical and Preservation Society.

The alternative proposition to move the stones to the Graveyard of the Atlantic Museum was also opposed because the groups felt that they should retain their connection to the lighthouse.

After months of correspondence between the two groups and the Park Service and with the involvement of the office of U.S. Rep. Walter Jones, R-N.C., and seashore Superintendent Barclay Trimble, a plan was finally forged.

The stones would be moved to a location in the vicinity of the lighthouse’s current location but would not be reassembled as a circle.

According to Bett Padgett, president of the Outer Banks Lighthouse Society, Trimble told them that the Park Service would prefer they not be left in a circle, lest it might give the impression to visitors that the lighthouse had been moved just a few feet instead of 2,900 feet.

They will form an amphitheater – with the stones forming semicircular rows – in the area behind the outdoor pavilion and the new site will be named “Keepers of the Light Amphitheater”.

Although plans have been made, the process of relocating the massive stones has only just begun.

“We have uncovered the stones to take measurements and start planning for the move and the barricade around the stones will be coming down tomorrow to allow for public access until the move occurs,” Trimble said in an e-mail yesterday.  “We have submitted information to the State Historic Preservation Office about our plans, and we will not be moving the stones until we have had communications with them.”

The Park Service could not provide a firm date for when the process will begin, but it is projected to occur within the next week or two.

The National Park Service has several open government contracts for businesses to bid on at Cape Hatteras National Seashore, Fort Raleigh National Historic Site and Wright Brothers National Memorial. Businesses that are interested in bidding on federal government contracts must do so through the System for Award Management (SAM) at www.sam.gov. Contract Opportunities at Fort [...] Seashore News |  Full Article

On July 23, the first sea turtle nest of the 2022 nesting season hatched along the Cape Hatteras National Seashore (CHNS). Since then, several more nests have hatched, and park biologists have started nest excavations. During a recent excavation on July 27, a live, leucistic loggerhead sea turtle was found at the bottom of the [...] Seashore News |  Full Article

Wright Brothers National Memorial is proud to welcome Dr. J. “Bob” Balaram, of NASA’s Jet Propulsion Laboratory, to help celebrate National Aviation Day on Aug. 19 and 20, 2022. Dr. Balaram is the originator of the concept that became NASA’s Ingenuity Mars Helicopter, and served as its chief engineer during its development, test, and operations. [...] Seashore News |  Full Article

The Cape Hatteras National Seashore (CHNS) recently announced a new summertime program, Kayak with a Ranger, which explores the salt marshes and surrounding waters of the Pamlico Sound Starting on Monday, July 25, and running through Labor Day, September 5, CHNS will be offering this program on Mondays and Fridays at 8:30 a.m. Pre-registration is [...] Seashore News |  Full Article

Dare County’s Current TV, in partnership with the Town of Kill Devil Hills, has released a video designed to educate and inform the public about the dangers of digging deep holes on the beach and the risks they pose to public safety. Earlier this year, a joint press conference was held at the Ocean Bay [...] Seashore News |  Full Article

Buxton resident dies after being rescued from the ocean by bystanders

A 66-year-old man from Buxton, N.C. died on Wednesday afternoon after being helped to the beach near the Sandy Bay beach access in between Frisco and Hatteras Village. Per a report from the Cape Hatteras National Seashore, the man collapsed on the beach after being rescued from the ocean by bystanders. The bystanders immediately began [...] Seashore News |  Full Article

Project underway to replace oceanside boardwalk across from Ocraco ...

A project is underway to replace the existing wooden boardwalk and viewing platform that is located across N.C. Highway 12 from the Cape Hatteras National Seashore’s Ocracoke Pony Pens on Ocracoke Island. Heritage Contracting of Chesapeake, Virginia, (in a partnership with the Cape Hatteras National Seashore), is constructing the new boardwalk and viewing platform using [...] Seashore News |  Full Article

A new webcam was recently installed at the entrance to the Bonner Bridge Pier, located at the south end of Oregon Inlet, per an update from the Cape Hatteras National Seashore (CHNS). New images from the webcam are uploaded approximately every 15 minutes to Cape Hatteras National Seashore’s Bonner Bridge Pier webpage at https://www.nps.gov/caha/planyourvisit/bonner-bridge-pier.htm. (Due [...] Seashore News |  Full Article

Expanded educational programs begin this weekend, and more National Seashore updates for the week of May 27

Visitors urged to use caution on the beaches between Rodanthe and Salvo, due to debris

Avon Pier opens, and other National Seashore updates for the week of May 5

Visitors urged to check rip current and beach condition forecasts before heading to the beach.

Seasonal ORV routes in front of villages close on April 15

Frisco and Cape Point campgrounds open, and other National Seashore updates for the week of April 8