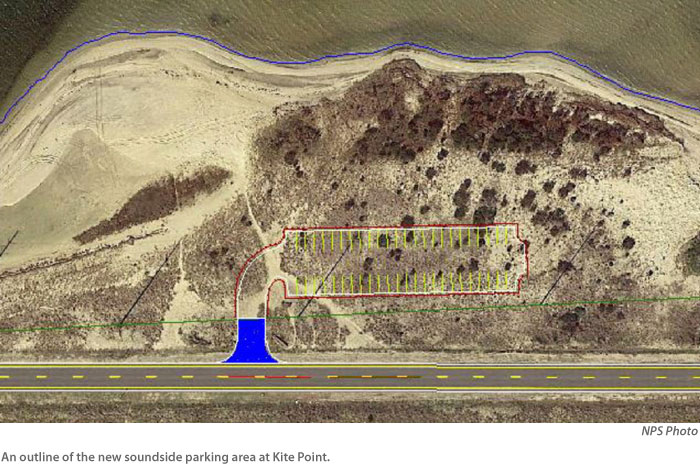 New parking areas at Kite Point in between Avon and Buxton, and at the former Naval Facility / Coast Guard housing complex at the end of Old Lighthouse Road, are slated to begin construction in early 2019. The two projects were outlined in detail at a Wednesday night meeting in Buxton hosted by the National Park Service.

The Kite Point parking lot is being established on the soundside, just south of the current Haulover Day Use Area. The parking area will have spaces for approximately 50 cars, as well as a paved entrance and a hard-packed surface utilizing clay and shells instead of pavement.

“It’s a very fragile area of the highway, so we are doing something low tech,” said Cape Hatteras National Seashore (CHNS) Superintendent David Hallac at the meeting. “Our primary objective is to get people off of the highway, as parking [on the side of Highway 12] has become a safety issue.”

Construction on the Kite Point parking area is scheduled to begin in January 2019, and to be completed by May 2019.

The new parking area at the end of Old Lighthouse Road is being constructed in two phases. The site where the parking area is being established was once the home of the Naval Facility Cape Hatteras, which was in operation from January 1956 until it was decommissioned in June, 1982. The site was then transferred to the U.S. Coast Guard where it eventually served as a housing complex, and was later transferred to the National Park Service.

The first phase of the Buxton Day Use area project includes clearing the road and opening the entrance to the site, as well as installing roughly 50 parking spaces, and a portable “Mobi-mat” walkway to provide handicapped access. Sand fencing will also be installed at several small portions of the site where potential pollutants have been identified by an examination contracted by the U.S. Coast Guard several years ago. (Further examination of the site is expected to be conducted in the future to review the presence of possible contaminants, and to proceed as needed.)

The first phase of the Buxton Day Use project is expected to begin in February 2019, and to be completed and open to the public by April 2019.

Both the Kite Point parking area and the new Buxton Day Use Area were established as two out of 29 potential projects that were identified in the Cape Hatteras National Seashore’s Proposal to Facilitate Additional Public Beach Access Project in June of 2013.

During the 2013 comment period when the project was first announced, Hallac noted that the CHNS received 1,472 comments, which all supported the new parking area. “Basically, all the comments said ‘please do this, but also build a bathroom,’” said Hallac.

Several attendees at Wednesday evening’s meeting outlining the project did voice concerns about the potential for increased traffic on Old Lighthouse Road, which would connect with the Buxton Day Use Area. Both David Hallac and County Commissioner Danny Couch, who was also in attendance, said they would talk with representatives at the North Carolina Department of Transportation (NCDOT) to see if additional safety measures could be implemented on Old Lighthouse Road, such as posted speed limit signs, enhanced shoulders / bike lanes, and adding a center line to indicate the two-way traffic pattern.

“There are solutions here… and I think we have an opportunity to [improve] that road,” said Couch.

The Wednesday night meeting attracted roughly 30 business and home owners, NPS personnel, and other community organization representatives who wanted an update on both projects.

Hallac noted that another meeting may also be scheduled in early 2019 to provide updates on both projects, as well as other Cape Hatteras National Seashore endeavors that are ongoing, or slated for the future.