A celebration of the Bodie Island Lighthouse’s 150th anniversary drew a huge crowd on Saturday, November 12, with an estimated 200 attendees heading to the Outer Banks landmark to mark the occasion.

Though the original event, (scheduled for October), was postponed due to inclement weather, the delay did not dwindle the enthusiasm, as evidenced by the number of lightkeeper descendants, state and local officials, U.S. Coast Guard representatives, and other stakeholders who were on site to join in the festivities.

The Bodie Island Lighthouse was first lit on October 1, 1872, and the current tower, (which is one of only a handful of brick lighthouses still standing in the United States), is actually the third lighthouse to guard the shoreline bordering Bodie Island.

The first structure was built in 1847 and then abandoned in 1859 due to a poor foundation, while the second, built in 1859, was destroyed in 1861 by retreating Confederate troops who feared it would be utilized by Union troops during the Civil War.

The third and final tower was built to be much taller and tougher than its predecessors. A 15-acre site was acquired for the lighthouse, (which was located north of the former lighthouse and on the opposite side of Oregon Inlet), and the “new” design had a similar foundation and plan that had been recently used at the Cape Hatteras Lighthouse in Buxton.

The light was electrified in 1932, phasing out the need for on-site lighthouse keepers, and eventually, the light station property was transferred to the National Park Service in 1953.

An extensive renovation that was initiated in 2009 and completed in 2013 opened the interior of the lighthouse to climbers after years of unuse, and the tower remains open seasonally for public tours today.

Still a functioning navigational aid, and also listed on the National Register of Historic Places, the Bodie Island Lighthouse is considered a historic treasure, both internationally and in local lighthouse-fan circles.

“The roots of our Outer Banks community really run deep, and nowhere is this more evident than the number of people present right here that have connections to these lighthouse keepers, and can trace their lineage back for hundreds of years,” said Woodard. “The Outer Banks are well-known across the entire country and around the world for our lighthouses, which have become iconic images that represent our Dare County community.”

Joan Gaskill David-Wyndham, (descendent of Vernon Gaskill Sr., a former lighthouse keeper), addressed the crowd during the program, and shared stories of her father John Gaskill’s childhood as the son of a lightkeeper.

“There was nothing that could make [John Gaskill] happier than talking about the lighthouse,” said  David-Wyndham. “At dinnertime, he didn’t tell me special stories, but they were just stories about two little boys who came here in the summer and just played all over the place. They just loved it here… Can you imagine two boys having this many acres to roam?”

Her father also assisted her grandfather when it came time to repaint the lighthouse, which was an inherently dangerous venture.

“During the Depression, my grandfather thought it would be nice and good PR if they hired some of the local people to paint the tower,” she said. “Daddy thought that was a good thing to do, so he offered his services, and he and a couple of other people painted it.”

In order to paint the structure, Gaskill was put in a small wooden box that was big enough for himself and a bucket of paint, and he was hoisted over the top of the lighthouse tower.

“You didn’t just get into the box – you have to climb over the railing up at the [top], while the wind was blowing,” she said, “so it was certainly exciting.”

Bett Padgett, President of the Outer Banks Lighthouse Society (OBLHS), also combined personal history while recounting the steps taken to restore and reopen the Bodie Island Lighthouse to the public in the late 20th and early 21st centuries.

In 1994, Cheryl Shelton-Roberts and Bruce Roberts, residing in Nags Head at the time, formed the Outer Banks Lighthouse Society (OBLHS). Their primary purpose was to address the ongoing damage they saw occurring at the Bodie Island Lighthouse, and other North Carolina lights as well.

That same year, volunteers from the OBLHS opened the lower portion of the lighthouse tower and offered interpretation to the public. Climbing, however, was still prohibited.

Then, in 1997, OBLHS sponsored an inspection of the tower and a formal report to the National Park Service by lighthouse historian Cullen Chambers. This report became the basis for the Park’s restoration timeline and strategy. The OBLHS continued to be connected with the project in the years that followed, donating thousands towards the restoration efforts for both the tower and the Fresnel lens, and the project officially launched in 2009.

Padgett recalled being in college years before the restoration project began, (and before the OBLHS was formed), and taking field trips to dilapidated castles and abbeys while studying abroad in England.

“I wondered ‘what is the point in this?’ until about the third castle,” she said. “I was walking up the steps, looked out the window, and my knees started shaking and I felt like, ‘Wow – what went on here in the year 1200? What kind of food did they eat? What were the clothes that they wore?’ and then I got it. England was saving their history – touch, and smell, and feel, and the experience of being at a location – which was so much more effective than reading a book.”

After outlining the exhaustive efforts the OBLHS had taken to help restore the lighthouse, Padgett explained that she hoped a new generation of students would have the same feeling.

“Why [do we do this?] So that when your fourth grader climbs the Bodie Island Lighthouse, his knees might get a little weak, and hopefully, it’s not from climbing the 214 steps. Maybe he will wonder what it was like carrying all that fuel to the top… and so he will appreciate what we’re carrying on as well.” 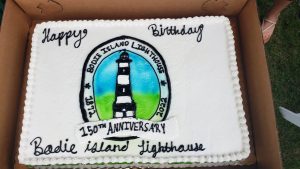 After the program, which was emceed by Outer Banks Lighthouse Society member Aida Havel, the crowd was treated to a birthday cake, as well as the sight of the lighthouse being illuminated just as the skies started to turn dark. Keeper James Charlet, noted historian, author, and public speaker, also provided a presentation following the illumination on the stories of shipwreck rescues that made the Bodie Island Lighthouse infamous.

By the end of the evening, stakeholders were both impressed and delighted at the size of the crowd and the enthusiasm for the 150-year-old landmark, and Superintendent David Hallac hinted during his remarks that this lighthouse celebration would not be the last of its kind.

“The National Park Service cares for 37 lighthouses around the country,” said Hallac. “The Cape Hatteras light is 152 years old, the Bodie Island Lighthouse is 150 years old this year, and the Ocracoke Light Station was built in 1823…”

“So I will let you all do the math, but consider this a ‘Save the Date’ notice for another celebration in 2023.”