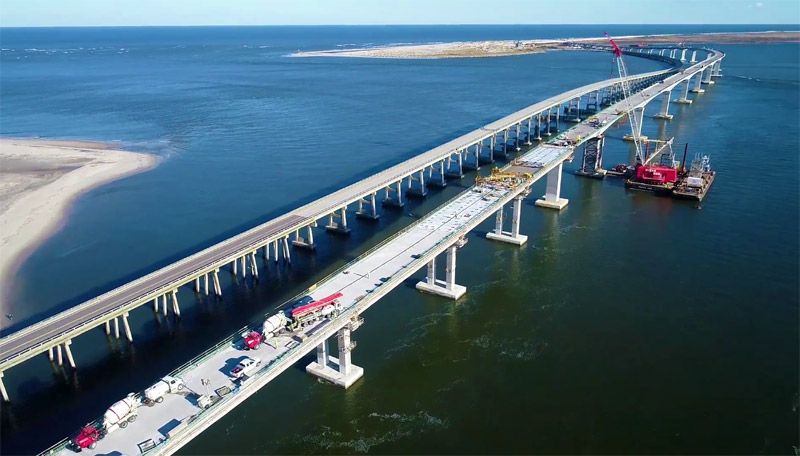 The new Bonner Bridge remains on track to open in February or March of 2019, as crews work on finishing touches to allow vehicles on the structure, such as paving the on-ramps that connect the bridge to N.C. Highway 12.

“Our goal is to open the [entire] bridge at once, without one-lane closures,” said NCDOT Public Relations Officer Tim Haas.

The Bonner Bridge was originally scheduled to open by the end of 2018, but bad weather and two major storms that affected the Outer Banks in the fall caused a delay late in the project.

However, the Bonner Bridge remained on schedule for the majority of the construction timeframe, and will open roughly three years after the project first broke ground in March 2016.

Using high-durability concrete, stainless reinforcing steel and other engineering features, the new bridge will have a 100-year life span and will provide more options for navigation under the
bridge, with a high-rise portion that is 3,500 feet long, and which reaches heights of 90.5 feet into the air.

Project managers are also in the process of orchestrating the grand opening celebration, and the specifics of the official ribbon cutting ceremony and related events will be coming soon.

Once the new bridge is finished, crews will get to work removing the current Bonner Bridge just east of the new site, leaving behind 1,000 feet of the existing structure at the southern end for pedestrians and anglers, and sending the old bridge debris to bolster artificial reef sites in Oregon Inlet.

The project in its entirety is set to be completed by the end of 2019, which includes about 10 months for the demolition of the original bridge.