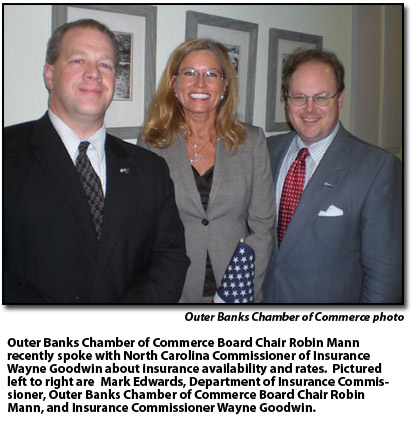 A proposal that could see homeowners’ insurance rates for rental properties skyrocket more than 20 percent has furrowed many brows on the Outer Banks, and even North Carolina Insurance Commissioner Wayne Goodwin may find it problematic.

Responding to insurance experts who questioned the justification for the increase, Goodwin announced on Monday that a public hearing on the rate increase proposal for non-owner occupied residences has been scheduled for June 21.

“This is a pretty big deal,” she said.

The commissioner, a Democrat elected in 2008, had visited the Outer Banks last week for two days, meeting with realtors, homebuilders, insurance agents, and political groups.

“There’s a lot of misinformation out there,” Goodwin told members of the Democratic Women of Dare on Thursday. “There’s a lot of folks who think the insurance commissioner asks for rates to be raised.

Rates are set by the North Carolina Rate Bureau, an independent organization representing all property insurance companies in the state. Only the legislature, he said, could change the way rates are established.

Although Goodwin was unable to directly address the proposal because of a pending lawsuit, he “did let us know that he does understand,” said Robin Mann, Democratic Women first vice-president.

“It did feel good to know that the consumer has someone who is listening to us,” she said, “and is as concerned as us with what’s happening in the insurance industry.”

Mann, as chairwoman of the Outer Banks Chamber of Commerce, had sent a letter to the department on Jan. 26 objecting to the proposed rate increase.

“At a time when home values are low and foreclosures are abundant, the effects of an increase in dwelling policy rates could prove devastating,” she wrote.

Dare County had earlier sued the Insurance Department over previous rate increases in homeowners insurance. The matter is before the state Supreme Court, which has not yet agreed to hear the case.

After the recent rate increase was filed on Jan. 4 by the bureau, Goodwin ordered a public comment period “as a way to increase transparency and engage the general public in the ratemaking process,” according to a Feb. 21 department news release.  The comment period had closed on Jan. 31.

Kelly said that while the average increase statewide for dwelling policies would be 20.9 percent, according to Rate Bureau figures, the rate for extended coverage — which covers wind and hail damage — is 41.65 percent statewide.

Annual premiums for rental or investment dwellings on the coast would increase about $1,000 a year on a $300,000 structure, Kelly said. The region already has a higher deductible than the rest of the state, she added, and the proposal does not reflect the stronger state building codes.

“Now with the economy the way it is, everybody’s at the breaking point,” Kelly said. A statewide catastrophic fund should be created to address homeowner losses in a fairer way, she said.

From 2003 through 2007, she said, the insurance industry in the state made about $1 billion, calculating the difference between premiums and losses. But even with Hurricane Isabel, the average loss for wind on the coast over the same period was less than $5,000.

“So it’s not that we have these huge expensive losses,” Kelly said. “We just keep seeing we’re paying more and more and we’re getting less and less.”