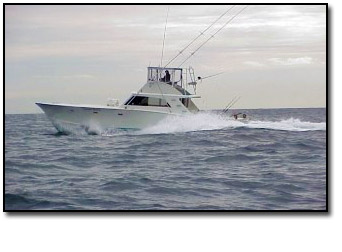 Graham Harrison, the 20-year-old Hatteras watermen who was injured when a charter boat ran hard aground near Oregon Inlet on Monday, is home from the hospital, but his mother says his recovery will be slow.

Vicki Harrison says Graham “is in pretty bad shape,” but added that his doctors have told her he is young and strong and should eventually recover.

Harrison was filling in as the mate on the charter boat Good Times, out of Hatteras Harbor Marina, when it hit a shoal so hard that he went flying and hit his head near his right ear and was knocked unconscious.

He was flown by helicopter to Sentara Norfolk General Hospital on Monday and was released Wednesday night, his mother said.

He has a fractured skull, broken bones in his right ear, no hearing in that ear, headaches, and had bleeding in his brain that has now stopped, Vicki Harrison added.

“He’s in bed,” she said today. He can get up to walk around for five minutes several times a day and that time will be gradually increased.

Vicki said Graham will have another MRI next week and will continue to be monitored by his physicians.

However, she said, he cannot drive for at least a month, and his doctors have advised  no boating for six months.

Graham, Vicki said, “has been on the water forever,” and is a member of a fishing family.  He and his father, Robert, fish commercially, and his mother and his sister sell the seafood in their shop, Harbor House Seafood Market, in Hatteras village.

With Graham not fishing, she said, it will be tough to get the wild caught, local seafood that is the market’s signature.

But, she added, other watermen have been by the house to visit and have promised to help until Graham recovers.

“I’m just going to put it in the Lord’s hands,” Vicki said.

“But he will live to fish another day,” she added.

Graham Harrison, 20, of Hatteras village was in intensive care at Sentara Norfolk General Hospital today, recovering from a boating accident yesterday in Walter Slough near Oregon Inlet
.
According to the U.S. Coast Guard, Harrison struck his head and was knocked unconscious when a charter boat ran hard aground in the slough, which is a narrow channel just outside the Oregon Inlet Fishing Center.

Crew aboard the charter vessel Good Times, which usually operates out of Hatteras Harbor Marina, reported the injury to the Coast Guard at approximately 6:30 a.m. and requested assistance.

Coast Guard crewmembers launched a skiff from Station Oregon Inlet to transfer the man in stable condition to waiting emergency medical services and an ambulance at the station. He was taken to the Outer Banks Hospital in Nags Head, and then taken by helicopter to The Norfolk hospital.

Harrison was filling in as a mate on the charter boat yesterday, according to his mother, Vicki Harrison.

“He hit his head on the right side, just above his ear,” Vicki Harrison said in a phone interview today.

She said her son suffered a fractured skull, broken bones in his ear, and some cuts, and has had bleeding in his brain since the accident.

Though he is still in intensive care, he was conscious, aware, and ate breakfast, Vicki Harrison said.

“He took a really big hit,” she said, “but he is holding his own, and we are very optimistic.”

The Harrisons are a Hatteras fishing family. Her son, she said, “has always been on the water.”

Graham and his father, Robert, operate commercial fishing boats, and Vicki and her daughter, Alana, run Harbor House Seafood Market, where the family’s catch is sold.

Vicki said she worried about her son fishing out of Oregon Inlet, which has been shoaling badly, and has been a concern to Outer Banks charter and commercial watermen and to the Coast Guard and the U.S. Army Corps of Engineers.

Robert Harrison was injured when a rogue wave hit his boat some years back when he was running out of Oregon Inlet, Vicki said.

“I was just telling (Graham) a few days ago that I didn’t want him fishing up there,” she said.

Three people were injured in January near Walter Slough, which is not federally maintained. However, the Coast Guard recently provided money to the U.S. Army Corps of Engineers for its hopper dredge, Currituck, to clear out the channel.

“This incident highlights the dangers of high speed and shallow water,” said Cmdr. James Mitchell, Coast Guard Sector North Carolina’s head of the Response Department. “All mariners are urged to arrive alive by operating at a safe speed, wearing their life jackets, and ensuring that passengers and crew know how to call the Coast Guard if the need arises.”

The Coast Guard is investigating the cause of the grounding.